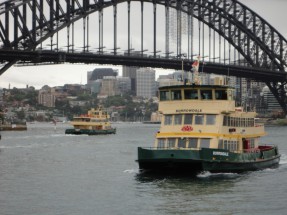 It’s hard to deny that despite arriving a decade late, the rollout of the New South Wales commuter transit smartcard ‘Opal’ has been a runaway success with the vast majority of paying passengers.

But the state’s Privacy Commissioner, Dr Elizabeth Coombs, isn’t so sure that the imminent elimination of almost all paper tickets is a good thing for those in the community who want to remain anonymous in this age of big data without having to pay a premium.

The Privacy watchdog this week took a bite out of NSW Transport Minister Andrew Constance over the announcement that that most paper tickets will be scrapped from the beginning of next year, arguing there’s an obligation to offer travelers an anonymous option in electronic form.

At the centre of the row is a requirement for concession holders, particularly pensioners, to register their personal details with the government for a concessional ‘Gold Opal’ card or pay full whack if they want to travel incognito.

“There is a need for NSW public transport commuters irrespective of the fare they pay, to be able to travel anonymously under the Opal Electronic Ticketing System. The provision of such a choice ensures that the NSW transport system is built around the needs and expectations of its users,” Dr Coombs said.

“Older people can face particular difficulties and anxieties about using electronic tickets. I understand that other jurisdictions such as Queensland and New Zealand provide alterative options to senior concessional travellers which both protect State revenue collection and the anonymity of pensioners.”

Dealing with concession holders has always been a bit of a challenge in electronic ticketing because the use of a single reloadable card means that eligibility can largely only be verified when the ticket is issued – as opposed to a customer fronting their concession status card at a ticket booth when they buy a daily pensioner excursion or single use ticket.

It also means that pensioners and concession card holders need to retain and remember where they put their Opal card before when they travel, a task that might be second nature for regular commuters but a fraught experience if your memory isn’t great experience — and you don’t have, or dread using, a credit card or automatic deductions.

It’s an issue that the NSW government is clearly conscious of given the delicate tip-toeing of Transport Minister Constance as he tries to move a pre-Facebook generation of senior citizens brought up on pennies and paper into the digital age.

Mr Constance said the phase out of the revered Pensioner Excursion Ticket “will be a major change for a lot of our pensioners and seniors” but that an “intensive campaign will be rolled out to inform [people of] the changes.”

Intensive is one thing, effective is another.

“We’ve had 370,000 pensioners and seniors sign up, and there’s another 5 months for others to get on board with Gold Opal,” Mr Constance said.

While it’s a large number, nobody at Transport for Sydney seems to be sticking their neck out to say what the percentage of eligible pensioners on Opal versus those who are not is at this point in time.

Instead the government is trying to nudge the digital holdouts across to make the switch voluntarily before the hard cut-off date arrives.

“It’s the same cheap fares – and you only ever need to buy one permanent ticket and you’re always ready for travel,” Mr Constance said.

“There is a lot on offer with Opal and I urge people to not leave their change over to the last minute, but to get in early so they can quickly access the benefits.”

Transport staff on the frontline obviously won’t go on the record, but are clearly wary of the potential for confusion.

A major issue is certain to be the topping-up of the electronic card for a demographic that might like parts of the internet, but are understandably reticent about performing online financial transactions.

One transport worker said the biggest issue for older people wasn’t having to pre-pay; people liked the certainty. Rather it was  not being able to visually see what value was left on a ticket and being uncertain when money would be drawn from a card or account.

For NSW Transport Minister Constance, the big story is in the rapid decline of paper ticket products over the last 12 months now most people are happy – and appy – to tap-and-go.

Pensioner Excursion paper tickets are down 45 per cent while the once must-have MyBus TravelTen has fallen away by 76 per cent. Weekly paper combined train and bus tickets are down almost 90 per cent, while ten trip paper ferry tickets have been almost completely sunk by a 94 per cent decine.

Meanwhile, the logical question of whether the government even needs to be in the transport ticketing business at all is flaring again thanks to Transport for London opening its system to everyday tap-and-go payment cards and payment enabled phones at the entry and exit gates.

The move has proved hugely popular with not just with commuters but visitors and tourists because of the sheer convenience of not having to buy a ticket.