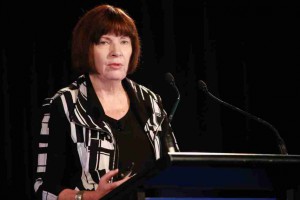 Australian taxpayers who give up $300 billion a year to the government probably don’t regard the Australian Taxation Office as their personal friend, but the massive revenue collection agency says it wants to change that.

After decades of pushing people to part with their money using stiff warnings and the fear of an audit, the ATO now wants to switch from being an agency whose public image is painted in regulation and compliance to a friendly, fast and convenient service delivery centred organisation … one that will only come after you if you deliberately try to do the wrong thing.

It might sound like a too good to be true, but Tax’s Chief Information Officer Jane King is adamant that much more progress will be made in fair and efficient revenue collection if the agency stays out of the business of adding complexity to people’s daily lives.

“A lot of folks use tax agents for instance, because they think that’s a safety net, they don’t trust that we are not going to get back at them or if they get something wrong, we will attack the agent.” Ms King told the Technology in Government Summit in Canberra this week.

“What we had to do is generate trust in the community that we are not out to get people.

“We are actually out to help and support you to come through the system in a sensible way and make sure that you are able to comply with the obligations that you’ve got  – but we are not there to catch people, we are out to support people.”

One of the biggest historical problems in fostering trust in the community for Tax has been the complexity of Australia’s taxation system and the way it interoperates with a similarly complicated welfare system that is changing constantly depending on the government and politics of the day.

While King doesn’t mention it in her speech, agencies like Centrelink have for years cross-matched data with the ATO to identify welfare fraud, a solution that works well as a policing mechanism and deterrent; but ultimately does little to show that tax is genuinely trying to make life easier and improve its service to the community at large.

Now Tax, like Centrelink, is hitting the accelerator hard on extracting practical functionality from the myGov online facility to try and eradicate as much duplication, repetition and end user complexity by using automation and technology to create an end to end transaction that essentially works itself out.

The bargain of trust that King and Tax is softly selling to the community is pretty simple. Now transactions and services can be largely automated, customers basically just have to let Tax peek into their electronic financial affairs and things will largely sort themselves out.

“The more we can see of your tax and superannuation business, the lower the touch will be. The less we can see, naturally the higher the touch has to be,” King says.

Online capabilities like myGov and myTax – the replacement for the eTax application – obviously assist with that trusted access and authorised capture of personal information to enable what King calls a “tick and flick” experience.

But there are far more radical moves afoot that have the potential to kill off not only annual tax refunds but annual tax returns themselves and – potentially tax agents.

King talks about a “personalised tax rate” for individuals that she says “is a very new concept” that will both calculate and collect on obligations as people earn money.

“This is going forward, where we are going to capture data and at the point where you are starting employment, understand where you are up to, get real time reporting and information and be able to adjust your tax rate on-the-fly,” King says.

“You can imagine that if we can combine that with the social services side of government, they can adjust benefits on-the-fly and we don’t have underpayments, overpayments, etc.”

But like so many good ideas that achieve efficiency through automation, there are downstream consequences both obvious and potentially unforseen.

On the obvious side, in the event that Tax does create a real-time, self-adjusting and auto-correcting collection system, tax agents stand to be big losers because many if not of them earn a living by cutting through the complexity of tax rules to help people get refunds.

Disruption is coming sooner rather than later too. King frankly admits that forthcoming changes to myTax will also have a very real impact on tax agents who largely just clip the ticket on relatively simple transactions.

“It will impact clearly on some of our stakeholders and partners, i.e. tax agents who earn the business of doing nothing but downloading pre-filed data, charging $80 and submitting,” King says.

“We are working very closely with our partners to understand [how] their business model [is] shifting, what is the value they can bring to their client, and how can we support that. We still want them in our broader ecosystem and there is a lot we can do with data that we can expose to them that will help them add value to their client.”

Even so, it’s becoming clear that the widely admired skill art of extracting a full refund from the ATO is moral high ground the agency itself wants to grab and exploit to its own benefit.

“We want to move to the next step of actually being proactive about ‘did you know you are entitled to these deductions?’” King says.

“We think this will go a long way and start that trust factor. You don’t need to go to the agent to find out, we are going to tell you what you are entitled to and make sure that you are putting it up there.”

To round the new age taxpaying experience off, King is selling a big dose of closure to regain trust by telling people that they will not be hunted down for an audit in the future – a visceral fear for anyone that has ever had their financial plans for the future suddenly realigned by an audit and a nasty bill.

“We are getting to a point where we are about to go back out to folks doing their lodgements, and tell them thank you very much, you’ve done a great job, you’re a good tax payer, and that’s it, we are closed. We will not come back and audit you,” King says.

“This is our commitment to you that we have accepted. So in closing that loop with your certainty, we hope to get trust in the community and we are part of the support mechanism.”