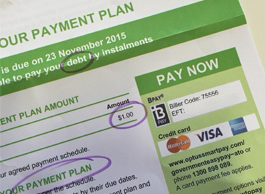 The Australian Taxation Office (ATO) is pursuing a Tasmanian woman for the tiny sum of just a single dollar that she says she didn’t realise was still left owing from her latest tax return.

The woman – who spoke to Government News on condition of anonymity – says she was given a stern telling off and warned that she needed to pay her “bad debt” immediately, before being offered a payment plan to cover the shortfall.

The self-employed woman says she only discovered that she owed the ATO the dollar after she made a chance phone call to the office about changing her details.

It’s claimed that during the conversation, the ATO officer informed her that she had made a mistake online when she paid her original tax bill – which was under $1000 – and told her that she had paid $1 too little.

The woman said the ATO official was needlessly antagonistic to her.

What came next, according to the woman, was a firm request to pay up or have the amount recorded as a bad debt against her.

“The tone of the ATO person was quite the real wrap-over-the-knuckles. Like it was his money!”

The vigorous pursuit of what in the commercial world would amount to a rounding adjustment raises serious questions around the focus and efficiency of the ATO’s tax debt recovery activities – especially when amounts easily cost more to collect on than they are actually worth.

The prospect of the sum of just one dollar being recorded as a bad debt – an action that could affect a taxpayer’s access to credit – is also questionable.

A common practice in commercial organisations for receivables that are based on estimates is to roll-over small amounts that may be over or under a final sum into the next payment period.

Even when put under unusual pressure to pay, some taxpayers still seem have a better sense of humour than the ATO.

Rather than pay the tiny amount owing straight away, the Tasmanian tax debtor requested an extension and cheekily asked if she could save up one dollar and pay the outstanding debt using BPAY. She could also have paid by credit card.

The ATO then sent her a letter – complete with a 70 cent stamp – confirming that she should settle her $1 debt by November 23.

She asked them not to waste money sending her a letter.

Despite Tax Officie’s unusual reaction, the Tasmanian woman said she did not expect the Tax Office to just write it off.

“They can’t do that. There are 23 million people in Australia. I’m really OK that I owed them the money, I understand the economics of it, but don’t talk about bad debt or payment plans.

“I just didn’t appreciate being made to feel like I owed a bad debt. I will pay that dollar. I pressed the wrong button [and entered one dollar too little]. It’s crazy.

“It cost them staff time on the phone and then it cost them 70 cents to send me the letter.”

An ATO media spokesperson said the office could not comment on individual’s tax affairs because of its privacy obligations.

The ATO spokesperson said: “The ATO is here to help everyone who voluntarily wants to meet their tax obligations. We strongly encourage anyone who is concerned about managing their tax debt, including situations that seem out of the ordinary, to contact us on 13 11 42 so we can discuss your circumstances and help resolve any issues.”

The Tax Office did not reply to Government News’ questions asking whether there was a minimum debt they would pursue, nor did they say how much it would cost to collect a debt of $1.

The ATO’s debt collection practices remains a persistent cause for complaint, according to Commonwealth Ombudsman’s most recent annual report.

“During 2013–14 about 21 per cent of complaints about the ATO related to debt-collection activities,” the annual report said.