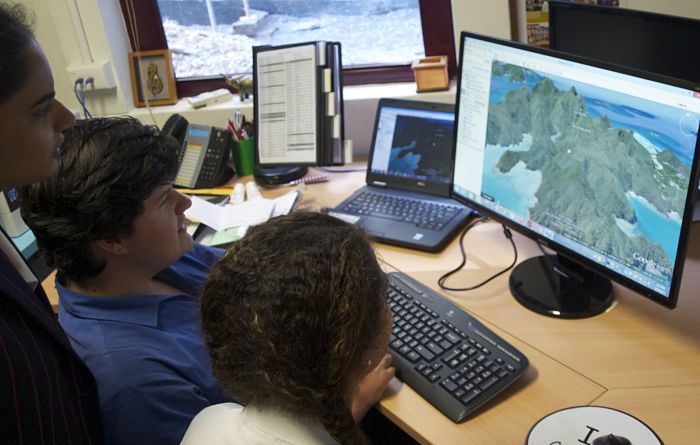 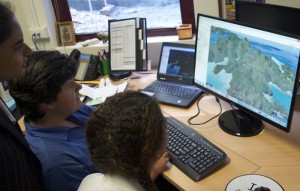 The spatial industry is booming, but urgently needs a new generation of young talent to avert a skills shortage. Mick Law from the Queensland Spatial Information Council at the Department of Natural Resources and Mines (Qld) offers some practical solutions to keep talent on the map.

Lights flashing and siren blaring, an ambulance speeds down the isolated dirt road in the Queensland outback, coming to a stop at a swollen creek. What is usually a slight dip in the dry dirt road is now an impenetrable mass of water with no obvious way through. The problem is how to get to the source of an emergency call-a rural property on the other side of the creek. There must be some way to solve this problem?

Spatial technologies are technologies that help us answer ‘where’ questions like the one outlined above; questions about place. These tools can be used to help us locate a new hospital, to see where our remaining native vegetation can be found, to plan a new sustainable housing development, to manage and coordinate the delivery of emergency services or to track animal species in the wild. They are versatile tools that can be used for analysis but also to effectively communicate information about places.

The term ‘spatial technologies’, sometimes ‘geospatial’, is really an umbrella term that covers a few different technologies: GPS, remote sensing and GIS are the main three.

A Global Navigation Satellite System (GNSS) is a network of satellites that circles the earth, beaming information on their location down to our planet. Sometimes referred to as Global Positioning System (GPS), GPS is simply the American subset of GNSS satellites. Similarly Europe has the Galileo network, Russia has GLONASS, China has BeiDou, Japan has QZSS and India has the IRNSS network; all of these networks, including GPS, come together to make GNSS.

Anyone on the ground with a receiver, such as a location enabled smartphone or in-car navigation unit, can use all publically accessible parts of the GNSS networks to determine the receiver’s location. The GPS network was previously the only network operating but now users can access many more satellites significantly improving performance in places where a GPS only receiver may not receive enough satellite coverage, for example under a dense canopy or in some urban areas. The system allows the user’s receiver to show them where they are, usually overlayed on a map, to record their location using a placemark or to record a track of where they have been. This information can be used in many applications, either in real time or recorded for later analysis.

Remote sensing, which refers to the gathering of data about the earth without actually being in contact with the earth, typically means aerial photos and satellite imagery which we now see in many mapping applications and tools. Remotely sensed data about a place can give the user a lot of information including weather and oceanographic information, land use, vegetation types, fuel level and moisture loads in a location.

Finally, GIS or Geographic Information Systems, allow users to view data that is linked to the earth in a mapping application. This data can be queried and searched to find particular entries, for instance a local government user may search through planning data to find a particular block of land for development as a playground that has a number of conditions such as that it is vacant, it is within 500m of a train station and it has an area of at least 150m2. The real power of a GIS comes when users place multiple layers of data together for analysis. An insurance business looking for a low-risk expansion into Asia could place a layer of the world’s cities over layers showing global volcanoes, earthquakes and tsunami risk zones. They could then search for cities over a certain population that avoid active volcanoes, earthquake and tsunami zones, increasing the users’ ability to use data for analysis.

Positioning Value
Spatial is important today – the value of spatial technologies to government and to society is almost immeasurable. How do you put a value on effective management of sensitive environmental resources? How do you value the efficiencies to society as a whole of streamlining traffic systems? Cleaning up and rebuilding after natural disasters? The tools are everywhere; starting with your smartphone, the backend of some of the most innovative and ground breaking technological enterprises in the last few decades such as ride sharing app Uber and space sharing app Airbnb involve knowing where things are – spatial technologies.

Globally spatial services–mapping, navigation and related services–contributed between $150 and $270 billion USD to the global economy[i]. That is ten times that of the video game industry and nearly half that of the airline industry globally. In 2006-2007 spatial information contributed over 1 per cent of Australia’s Gross Domestic Product[ii], a figure supported in a 2011 study from Land Information New Zealand[iii].

This contribution gets even better when you start to allow more people access to more data. According to these studies, loosening restrictions on accessing and using government data could boost that economic contribution by up to 50 per cent; most jurisdictions in Australia have adopted an Open Data policy which allows easy and free public access to government spatial data, like Queensland’s 2012 Open Data Initiative and New South Wales’ 2014 Location Intelligence Strategy. Business and industry can take this data and innovate; South Australia’s data.sa resource is a great open data portal that also contains some examples of apps and ideas created using the South Australian government data, many of which are spatial.

Queensland led the way in making spatial data more open, easily accessible and free through tools like the, open data portal, QTopo (an online topographic mapping tool) and the Queensland Globe, a tool that connects the user to Queensland Government open spatial data and displays it in Google Earth.

New South Wales has done this with the New South Wales Globe and federally National ICT Australia (NICTA) has developed the National Map as a tool to collate and display federal government data from a range of agencies. More agencies will release similar tools in the near future that connect people with data in ways never before seen.

There is a cloud over all of this positive news. Simply, despite the booming nature of the industry there are simply not enough students taking up these courses in universities to fill the required shortages that currently exist. Unlike more rigid, traditional professions, the pathways into the spatial industry are many and varied; some come via university, some start at the very bottom and move up the ladder but the opportunities are abundant because the technology is being developed and improved at a rapid rate and those pathways into the industry are so diverse.

Where government can help itself
So what does this mean for Australia’s governments? It is in your best interests over the long term to support spatial education to help mitigate the impacts of industry shortages, help boost the impacts of improving spatial education and to add value to the community. How can you do that? Here are three suggestions:

Back on track
The paramedics discuss their subsequent move. Thankfully spatial technologies are being used across Queensland to map wet and dry access to rural and remote properties so they can quickly bring up an alternative route to the property and set off. Currently landowners can map out the internal roads and tracks on their property as well as geocode different access points for airflight extraction, next they will upload all of this data to a database for all emergency services to access. A tool would have to be developed to integrate free government data with this local knowledge to map those features and present that data via a simple mapping application that any emergency service can use with a tablet device. So it just might be that a student sitting in an Australian classroom right now is going to be the one that develops that tool. Get out and inspire them, it’ll be good for us all!