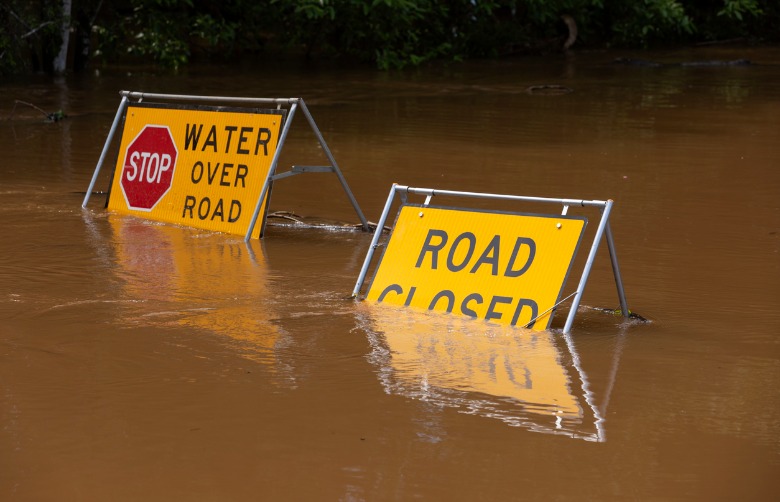 Councils are facing up to the fact that planning for their cities has been based on assumptions of weather patterns that are being dramatically revised.

Disaster-weary NSW councils are looking at a major rethink of the way they do infrastructure and planning after the latest extreme weather event.

Cr Greenhill says the Blue Mountains has suffered $400m worth of damage to infrastructure due to rain since the beginning of the year.

For a council with an annual income of $90 million, the financial pressure is intense, and Council is looking at ways of paying the bills including via a visitor parking contribution.

Cr Greenhill rattles off the disasters he’s experienced in the nine years he’s been mayor.

Some 200 homes were lost in two hours in the 2013 bushfires, followed by multiple rain and storm events, leading to the black summer fires of 2019-20 in which more more than 70 per cent of the world heritage area was burned.

That was followed by another rain event at the beginning of 2020 and massive damage caused by la Nina events extending into the winter of 2022.

“We are weary, our community is over it,” he tells Government News. “We have suffered back-to-back multiple natural disasters driven by climate change since 2013.”

With a city that runs 40km along a ridgetop Cr Greenhill says the LGA was always susceptible to climate extremes.

But when the city was built between 1920-60 the climate was nothing like it is now. As a result, the current infrastructure was never designed with the effects of climate change in mind.

“There were no black summer fires back then,” Cr Greenhill says.

“Sure, you had bushfires, but not the extremes we see, not fires that burn against the wind. We’ve never seen fires burn from the Blue Mountains into Lithgow before. We’ve never had rainfall like this.

“When they built our city all those years ago, it’s easy to blame them, but they never had 200mm in a day. That never happened and they couldn’t possibly have forseen this.”

In the midst of the crisis Council had to deal with the immediate emergency – stabilising hillsides, trying to keep roads open, closing unsafe areas and manning barricades, clearing debris and assisting with evacuations.

With conditions eased for now, the focus is on recovery.

“It’s not good enough to repair, we have to build back better,” Cr Greenhill says.

The $400 million damage bill isn’t just for repairs. It will involve a whole new city design, with flood resistant roads and a drainage system built to cope with higher volumes of water.

The effort will require extensive geotechnical surveying and expensive new materials that are better able to withstand battering from extreme weather events.

“What we’ve had before just won’t work for what’s confronting us now.”

Wedged between a towering escarpment and the ocean, the Wollongong LGA comprises a narrow band of infrastructure that has always been vulnerable to inundation. It also suffered major road damage from this month’s rain.

Mayor Gordon Bradbery tells Government News that Wollongong City Council has invested in tens of millions of dollars worth of flood mitigation and stormwater infrastructure since the 1998 floods, which has tempered the impact somewhat.

But now Council is facing a new problem, and one that’s also being played in the Hawkesbury and Nepean regions.

“We started out being built on the higher contours but now,  specially residential development, is now intruding onto more vulnerable land,” Cr Bradbery says.

“Everybody wants to live on the coastal fringe but this event has set new benchmarks. We’ll have to recalibrate where we allow building and the type of building we allow.”

Cr Bradbery says “regardless of what you call it” there’s been a dramatic change in weather patterns across Australia.

Like Cr Greenhill, he says the city’s planning has been based on assumptions of weather patterns that now have to be revised.

The immediate task for Council is making sure residents in the most vulnerable areas are safe, educating the community and ensuring emergency escape routes.

Longer term planning will have to deal with bigger questions.

“As I’m concerned we have to rethink  where we’re going to locate populations,” Cr Bradbery says.

“Australia wants to increase its population and we’ve based our economy around a large labour cohort.

“The question is where are we going to put them? How are we going to house them? In which type of housing? Where are the safest locations? That’s the sort of thinking that needs to be applied now.”

In Wiseman’s Ferry north west of the Sydney CBD, flooding saw residents cut off and trapped in their homes.

She also accuses the state and federal governments of decades of inaction on disaster spending, with 97 per cent of spending occurring after a disaster has happened.

“They do and should bear some responsibility for climate risks and costs because of lack of preparation and planning,” she tells Government News.

As well advocating for more disaster funding, councils also need to become advocates for changes to insurance models, she says, including shifting to a Medicare-style system.

Cr Heyde says nearly half the submissions to floods survey carried out by council in 2010-2011 listed property values and anxiety about insurance premiums as a top concern.

“Insurance is a big issue,” she says.

“We’re seeing market values where people are uninsurable in places like Lismore and Townsville and I’m really worried that’s going to happen in Hornsby shire, because we have many thousands of homes exposed to flooding and 50 per cent of houses also on bushfire land.

“In the longer term council needs to be very active and noisy in advocating for better flood and bushfire mitigation support and the issue of insurance needs to be looked at.”

Residents, however, were less keen to hear buck passing.

“They all duck for cover and no one wants to commit to get things done,” said Wiseman’s Ferry resident Sven Johannsen, whose home was impacted by the flood.

“We need answers on the roads to be able to get out and we need clean water down here too, as everyone’s rain water tanks have gone under or been damaged,” he told Government News.