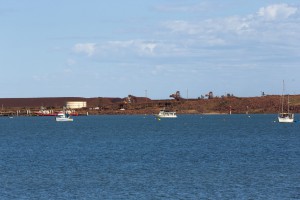 It could be about the only thing the Abbott government and the Community and Public Sector Union (CPSU) agree on: illegal boat arrivals are not being cause by industrial action at Border Force.

In a bizarre sequence of events on Wednesday, both the Minister for Immigration and Border Protection Peter Dutton and the CPSU issued stiff denials that a vessel suspected to be carrying asylum seekers from Vietnam which appeared around 100 km off the Western Australian coast had snuck through because of staffing gaps.

But the big missing piece is who has actually levelled the accusation or started the rumour that has two normally warring parties shaking their heads in unison.

The prospect of union industrial action resulting in illegal boat arrivals might outwardly look like a golden opportunity for the government to lay blame on a hot button issue, but the implications are sufficiently serious for Border Force to have the idea shut down almost immediately.

The first of those implications is that Border Force’s staff and management are so badly at odds with each that national security may have been compromised, a pretty bad look for the agency, its minister and the union alike.

The ABC has reported that when Immigration Minister Peter Dutton was asked whether the work bans left gaps that led to the boat’s arrival, he replied that “The short answer is no.”

The same ABC report cited Prime Minister Tony Abbott refusing to “provide any details in response to the reports, saying it is an “iron law” of his Government not to comment on operational matters.”

The questions and their denials have raised the obvious issue of whether someone within the Abbott government’s usually tightly controlled management of so-called on-water affairs had gone off-piste in an attempt to make political mileage.

Another distinct possibility is that a baseless allegation was thrown into the mix through online discussion groups and found a life of its own.

Over at CPSU headquarters, the was union liker Peter Dutton was similarly having none of it.

The CPSU said it could confirm union members in the Australian Border Force Marine Unit “are imposing a range of work bans as part of protected industrial action aimed at securing a fair enterprise agreement” but hit any idea that new boat arrivals were linked to this for six.

“We emphatically reject any suggestion that the protected industrial action our members are taking has resulted in an asylum-seeker vessel being located off the Dampier coast,” CPSU National Secretary Nadine Flood said in a tersely worded statement.

The CPSU also notably avoided sheeting any blame for the accusation back to the Abbott government, a move that strongly suggests the two interlocutors understand each other’s position.

“Staff in the Australian Border Force Marine Unit have one of the toughest jobs in the public service. They are at sea and away from their families for up to a month at a time, often in very confronting and difficult situations,” Ms Flood said.

She added that “the protected industrial action underway includes a ban on a range of ‘in port’ activities such as loading/unloading stores, rubbish and equipment, pre-departure checks, routines and maintenance activities.  These actions are causing some in-port delays.

“There is also a ban on members undertaking boarding or enforcement activities at sea which is primarily impacting on vessels targeting illegal foreign fishing activities.”

Ms Flood stressed it was important to note that “this protected industrial action, including ‘safety of lives at sea’ and national security safeguards, has been fully negotiated and properly notified with the Department of Immigration and Border Protection and approved by the Fair Work Commission.”

Staff at Border Force are some worst off under the agency’s new enterprise agreement according to the CPSU with some staff standing to lose between $5000 and $8000 a year in take home pay.

“Many are worried about how they’ll pay their bills,” Ms Flood said.