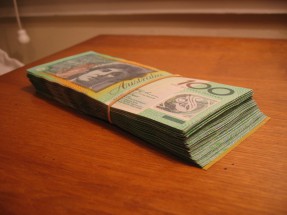 It’s a big number call likely to prompt Finance departments across the nation to reach for their calculators.

Australian taxpayers could realise economic benefits of more than $20.5 billion over the next decade if Australia’s three tiers of government manage get their act together on digital transformation according to sponsored research by forecaster Deloitte Access Economics.

The consultancy has reckoned that the estimated net benefit of the disruptive trend almost every minister is namedropping is worth “1.3 per cent of annual Gross Domestic Product or approximately $880 in net benefits per Australian citizen or $2,000 per household.”

A major part of the mammoth saving stems from a huge cost reduction that can be realised by moving government transactions from face to face and snail mail channels to online execution.

Launched by Communications Minister Malcolm Turnbull, the Digital government transformation report estimates online transactions for government now cost around 40 cents a pop versus a personal interaction that incurs a cost of almost $17.

Phone transactions and interactions are estimated to cost $6.60 a piece, making them 16.5 times more expensive, while postal transactions chalked-up a cost of $12.90 a piece according to Deloitte – hardly a stamp of fiscal efficiency.

“Of the estimated 811 million transactions at the federal and state levels each year, approximately 40 [per cent] are still completed using traditional channels. If this figure could be reduced to 20 [per cent] over a ten-year period, productivity, efficiency and other benefits to government worth around $17.9 billion (in real terms) would be realised along with savings in time, convenience and out-of-pocket costs to citizens worth a further $8.7 billion – and all at a cost of $6.1 billion in new ICT and transitional arrangements,” Deloitte said.

The numbers may sound huge, but as anyone in banking will tell you, volume figures need to be viewed in proportion.

For example BPAY has publicly estimated its payments volume for the financial year to June 2014 was 331 million.

And in an eerie coincidence, BPAY’s base transaction charge (before banks add their margin) is also 40 cents.

When you start looking at higher volume and lower value payment card transactions, the volumes are much, much bigger.

The Australian Payments Clearing Association, which keeps official tabs on how money changes hands, puts the monthly number of debit card transactions (think eftpos) at 350.6 million for 2015 with credit cards transactions coming in at 179.2 million a month for the same period.

Perhaps one of the most telling trends in the 74 page Deloitte Access Economics think piece, which was commissioned by software stalwart Adobe, is that the cost of conducting government transactions face could be tracking-up sharply over previous estimates from previous years.

Part of the justification for the Howard government bringing in EasyClaim – which electronically puts Medicare refunds directly into people’s bank accounts from point of sale terminals at a doctor’s surgery – was the estimated $10 processing price tag for an over-the-counter cash refund.

Using that $10 figure as a very rough benchmark, it seems that in less than 10 years the cost of a face-to-face transaction for a government agency could be up more than 50 per cent given it’s now estimated to be $16.90.

One driver for that rise is likely to be quite logical. As officials at the Department of Human Services have previously observed in public presentations, it’s the straightforward and easy transactions that migrate to online channels first, thus leaving counter staff to deal with more complex, challenging and time consuming matters to resolve.

Another challenge for government agencies that are now digitising their services is ensuring that they have a plan in place for if and when online channels misbehave or are knocked out of action. Both the Australian Taxation Office and the Department of Human Services have this year felt the heat of customer anger thanks to hiccups in processing online or phone-based transactions.

The Deloitte Access Economics report also has some cold comfort for public servants already looking over their shoulder for the next round of jobs cuts.

Under the heading of “Transitional and redundancy costs” the consultancy says that there is “potential to reduce staff time required on traditional activities by roughly half for 50,138 government staff over ten years.”

“There may be some costs required to smoothly transition 2,507 individuals each year into new job roles in Australia,” the report says, noting a redundancy cost as one option.

“Based on the current  average annual salary for these various roles, it will cost the government roughly $16.9 thousand in redundancy costs per individual or an annual cost of $42.4 million for ten years. This is a net present value cost of $318.7 million for government,” the report says.

It notes that as New South Wales has illustrated, retaining and retraining staff in new digital roles is also a firm option, but one that carries some training costs.