City of Adelaide Council is pushing ahead with plans to build a ten Gigabits per second optical fibre network covering the CBD and North Adelaide, making the South Australian capital ‘the centre of the universe’ for high-speed internet.

The council voted last week to develop a business case to underpin the ultra-fast network, which will connect the new network with cloud-based data centres and compliment the NBN roll out and the state government’s Gig City project.

The council’s ambitious agenda aims to make Adelaide one of the easiest Australian cities to do business in and to inspire Adelaide businesses to market their products and services globally, as well as attracting universities, research centres and top talent.

Crucially, the new network will mean that speed and big data transfer is not inhibited by public internet congestion. It can send 10 billion bits of data per second and it is 416 times faster than ADSL2+. 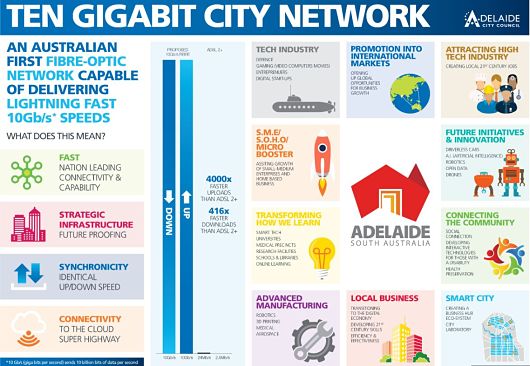 “It has the potential to make Adelaide the centre of the universe,” Mr Haese said. “This can be the solution for attracting head offices to Adelaide, creating jobs, driving creativity, innovation, investment and so much more.”

“We’re dedicated to having the fastest, most reliable data transfer in the nation. We’re confident from overseas experience that this infrastructure will attract new businesses in new growth industries, as well as support the growth of existing businesses in the city.”

The council is hoping to become a dynamic hub for creative and innovative industries, such as digital start-ups, video gaming, robotics, 3-D printing, drones and high-tech medical manufacturing.

A council-produced graphic provides examples of a brave new future for the city, supplying medical robotic services to Canada, partnering with Mexican and European universities on driverless cars and working in real time with film studios in America.

The city and the state could do with some good news after painful job losses in the car manufacturing industry (including the shutdown of Holden in North Adelaide), lay-offs at the ASC Shipyard and recent statewide electricity blackouts.

South Australia has repeatedly held the top spot for unemployment in the nation’s Labour Force figures and currently has the second highest rate at 6.8 per cent, behind Tasmania on 7.2 per cent (August 2016 figures).

But it is not all just about jobs. The fast network has other, diverse applications. For example, it could transform online learning, deliver interactive technology for people with disabilities and connect community groups.

The plan also aims to reduce the current and future cost of council communications, such as voice, data, internet and networking services by making the city a ‘customer’ of the new network.

Adelaide Council’s Associate Director of Information Management, Peter Auhl said the cost of the network was being explored in the business case and that the council was looking at “creative options” for funding it without burdening ratepayers.

He said the work would involve a mixture of using infrastructure currently in the ground (conduit) and new installations where needed. The first phase of the project could be active in under 12 months, pending the outcome of the business case.

“We are seeing this infrastructure very much focused on business-to-business and business-to -service types of transaction connecting our entire city to the cloud,” Mr Auhl said.

The study says: “A multi-Gigabits per second optical fibre network will enable customers to interconnect with leading global business tools/processes, applications, information, content and services. It will also enable interconnection with other customers (peer-to-peer connections) at very high speeds.

“These interconnections are without the limitations of the public internet which shares connections between customers and involves multiple and longer distance transmission options creating delays in data transfer.”

And also: “An Adelaide City Ten Gigabits per second optical fibre network could differentiate Adelaide from other cities by providing city based businesses, government and universities with direct and high performance connections to connectivity specialists. This provides competitive advantage for the council and businesses.”