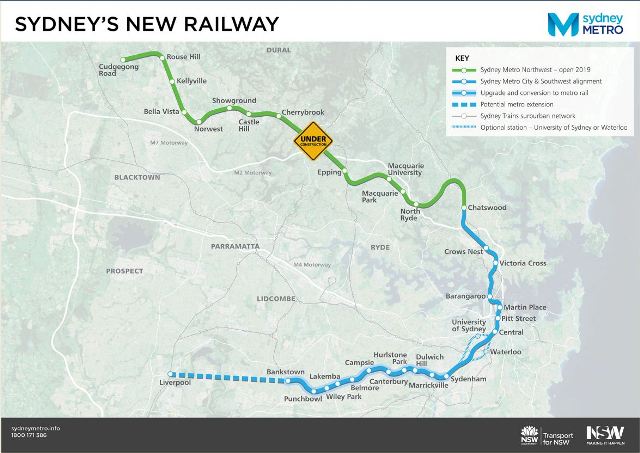 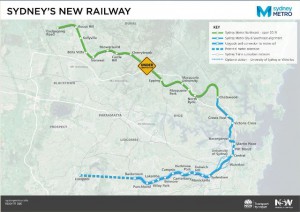 Sydney’s straining heavy rail transport network has been given a huge boost after New South Wales Premier Mike Baird confirmed the construction dates and locations for a new high frequency driverless subway system that will connect the North Shore with the city’s Southwest.

The massive investment in construction, understood to be estimated to be more than $12 billion, will finally create a second rail crossing underneath Sydney Harbour to eliminate a historic choke point that has been created problems for authorities and delays for commuters for decades.

According to maps released by Transport Minister Andrew Constance, new stations will be built at Crows Nest, Victoria Cross (in North Sydney), Barangaroo and underneath Pitt and Park streets in the CBD.

The government says the first tunnel borers will be in the ground in 2018, with the centerpiece of the project being new twin tunnels “stretching the entire 15 kilometres from Chatswood to Sydenham.”

But the big payoff for commuters is rapid transit style second rail network will now stretch from Sydney’s far North West fringe to potentially as far as Liverpool via the CBD and Central.

Set to be completed by 2024, the new line is the second phase of the giant ‘Metro’ project and will link the North West rail link at Chatswood to Sydenham where the existing T3 Bankstown line will be converted and upgraded for the new trains to run through to Bankstown station itself and potentially out as far as Liverpool. 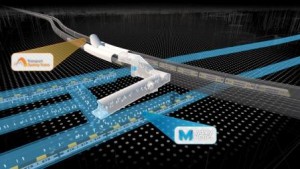 The move to rope most of the T3 Bankstown line into the Metro project means that passengers using Marrickville, Dulwwich Hill, Hurlstone Park, Canterbury, Belmore, Lakemba, Wiley Park and Punchbowl will get access to the driverless high frequency services that come at short intervals of a few minutes rather than running to a timetable.

“Sydney Metro will change Sydney forever – it will help boost capacity of our rail network by 100,000 people every hour, servicing our growing global city for generations to come,” Mr Baird said. 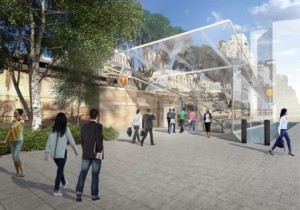 The state government is betting heavily that the new single deck trains will boost network capacity because they can load and unload passengers several times faster than existing double decker trains that require a longer ‘dwell time’ at stations.

The T3 Bankstown line has long been regarded as one of the slower and under-patronised corridors in Sydney network, a situation the NSW government clearly wants to remedy by its conversion to Metro.

Mr Baird is also actively selling the Metro project’s potential to relieve crowding and share the load with the crammed T1 Western line that links Campbelltown and Liverpool to the CBD and North Shore and beyond.

According to Mr Constance, the government will lodge a State Significant Infrastructure Application later this week formally setting out the metro route, the first necessary step that allows the government to kick off the process of compulsory acquisition of land in and around the new stations and the rail line itself.

Mr Constance said Transport for NSW had begun contacting affected property owners about Metro build, most of which will be commercial tenants in the CBD, North Sydney, Chatswood, Sydenham and Crows Nest.

However there is still no clarity over one of the Metro’s most crucial stops between Central and Sydenham, with planners still yet to reveal whether the new line will get a station at the sprawling University of Sydney or at Waterloo – to service the massive Green Square urban infill redevelopment.

Although Sydney Uni has been agitating strongly for better transport services including a Metro stop, a real concern is that the redevelopment of the city’s semi-industrial south could miss out on a mass transit connection, forcing commuters onto busses and into cars.

Developers have to date been largely siding with the Waterloo option because they would have far more potential to get approvals for lucrative urban infill redevelopments in areas that are far less controversial than options in the inner west.

Also in the Metro mix is the as yet unresolved issue of whether Sydney’s second airport being constructed at Badgery’s Creek will get a rail connection, infrastructure ousted former Prime Minister Tony Abbott had steadfastly refused to subsidise using federal money   despite the airport being a federal asset.

Mr Baird’s office said the community would have the opportunity to give feedback on the Stage 2 Metro project as part of the environmental planning assessment process towards the middle of 2016.

Industry will get a second briefing in December to take account of the big increase in scope, including the proposed delivery method.

•    Crows Nest located on the western fringe of Crows Nest village with access to the station via the corner of Clarke Street and Hume Street, and the corner of Pacific Highway and Oxley Street;
•    Victoria Cross located in the northern section of North Sydney’s CBD. Access to the station would be via the eastern side of Miller Street between Berry Street and Mount Street;
•    Barangaroo station will combine Sydney’s world-class metro rail system with the city’s new global business hub. It will be located at Barangaroo Central;
•    Martin Place will be integrated with the existing suburban station underground between Castlereagh and Elizabeth streets. It will include a world-class subterranean rail interchange which means customers won’t need to go to the surface to change trains; and
•    Pitt Street metro station will be located below Pitt and Castlereagh streets and north of Park St, servicing the southern CBD and the George St and Pitt St retail precincts.
•    An underground station at Central linking to existing intercity and suburban rail services.