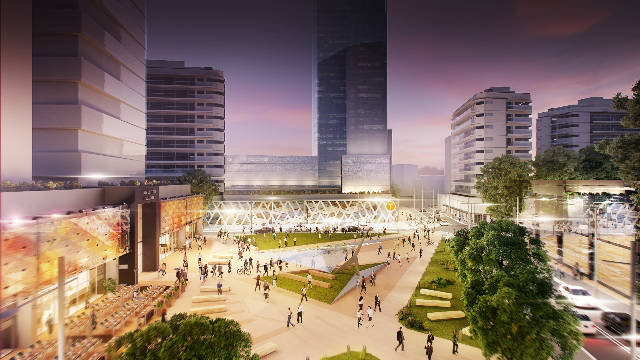 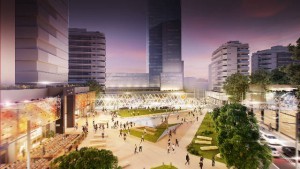 Sydney’s most run down inner city suburb is poised for wholesale redevelopment – both above and below ground – after the Baird Government revealed it will trunk the city’s new Metro subway line directly through Waterloo, replacing they city’s most notorious Housing Commission tower blocks in the process.

In a joint statement issued on Wednesday, New South Wales Premier Mike Baird, Minister for Transport and Infrastructure Andrew Constance, Minister for Planning Rob Stokes and Minister for Social Housing Brad Hazzard revealed the new big picture project will push a whopping 10,000 new dwellings into the gritty precinct to break its recent history as a hub for welfare dependency thanks to a heavy concentration of social housing.

The decision to put the new Metro station into Waterloo appears to have easily beat out a competing plan advocated by the University of Sydney which would have had the new subway run under its campus, a move that ultimately would have mostly benefitted people travelling to and from the institution rather residents living near it.

The official sales pitch for the Waterloo Metro is that the combination of a fast subway linked to the CBD, the new Barangaroo development and the North Shore won’t sacrifice or relocate the large existing amount of social housing stock in Waterloo; but it will blend-in social housing dwellings with mainstream developments. 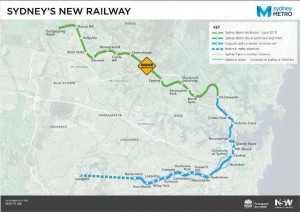 “The ageing Waterloo social housing estate will be progressively renewed to create a vibrant community with a mix of private, affordable and social housing,” the joint statement said.

“There will be no loss of social housing from the current 2,000 dwellings.” 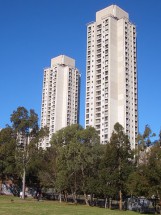 Its most prominent structures have been dubbed the “suicide towers” because of the overtly public manner with which some occupants have tragically done away with themselves over the years, badly traumatising their neighbours in the process.

A major obstacle for redevelopment of the Waterloo area has been the legacy of 50 years of poor transport planning, a disconnection which has acted to isolate the area despite it being just 4km south of the Sydney CBD.

Still largely serviced by slower running buses, the opening of the privately operated Airport heavy rail line with stations at Green Square and Mascot did nothing to alleviate transport problems thanks to sky high-ticket surcharges that often made taking a taxi cheaper.

The Baird government is now aiming to finally fix that malaise once and for all, routing the high capacity, high frequency driverless Metro rail service under the precinct as the catalyst for its redevelopment and renewal. The dream is to transform the area from a rundown welfare trap to a well serviced and fully functioning inner city neighborhood.

“The metro station creates the opportunity to transform Waterloo and make it a better place to live for future and existing residents, many of whom are amongst the most vulnerable people in NSW,” Mr Baird said.

“Waterloo Station will help bring new jobs to the area as well as providing a direct public transport link to employment hubs at Barangaroo and Martin Place.”

But the Baird government appears keen to avoid any perception that the Waterloo redevelopment is cashing in on inner urban gentrification at the direct expense of lower-income residents, and with good reason.

A major challenge both the state government and the City of Sydney face is the double whammy of surging property prices and rents in Sydney that now act to price-out inner city workers – ranging from nurses to council workers and service industries staff – from living close to their jobs.

A potentially big cost for the government, as well as businesses, is rising wage pressure on inner city jobs driven by soaring property prices or long commutes.

“I can assure Waterloo tenants that if they want to remain in Waterloo after the redevelopment, they can do so,” Mr Hazzard said.

The Baird Government is also tip-toeing around the issue of “value capture” – a form of property tax levied on the windfall developers and property owners reap when property values increase thanks to new infrastructure. 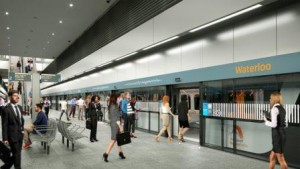 While the Parramatta Light Rail project is copping a straight $200 per square metre levy on new developments there, the tax is still in consideration mode for Waterloo. That leaves the door open for developers to come forward with more socially innovative proposals to create better amenity as a potential offset against a new levy.

“The NSW Government will investigate a Special Infrastructure Contribution around Waterloo station to be reserved for the Sydney Metro project and associated infrastructure, under a similar model to the Parramatta Light Rail project,” the Baird Government statement said.

“The decision to choose Waterloo over Sydney University is the right one to drive urban renewal,” the chief executive of peak developer group Urban Taskforce, Chris Johnson said.

“The price of new housing will go through the roof if it has to fund rail infrastructure and social housing. While the new apartment market has been booming in the last year there are signs that this is tapering off. The NSW Government must be very careful about adding too many taxes to the apartment development market as they will end up killing the goose that laid the golden egg.” 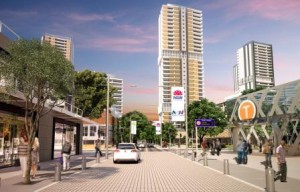 “The Urban Taskforce is also concerned that the NSW government will want private developers to fund the rebuilding of the 2,000 existing social housing units as part of the urban renewal of the Redfern Waterloo estate. The Government has required the private sector to fund new social housing in urban renewal developments at the Riverwood and Ivanhoe Estates and to subsidise this through new private housing. The Government’s Draft Redfern Waterloo Built Environment Plan 2 calls for a mix of private and social housing and implies that the private development can subsidise the social housing,” Mr Johnson said.