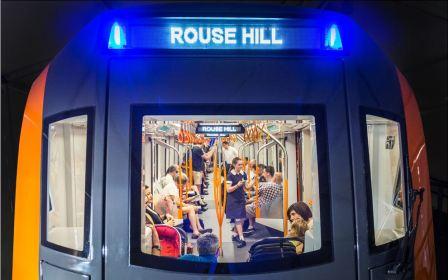 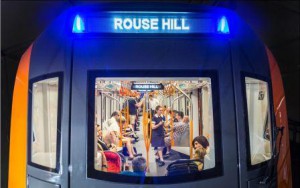 Sydney commuters have been given a sneak peak of their rail commuting future after the New South Wales government pulled the covers off a 13-tonne life-size model of the city’s new driverless metro trains that give passengers a front seat view of their journey for the first time.

State Transport Minister Andrew Constance on Thursday revealed the new rolling stock that the transport authorities are putting into “customer testing” to gather public feedback on everything from seat fabric to carriage layout.

Dubbed metro-trains because of their similarity to European and American inner urban and underground rail cars, the new carriages free-up substantially more room for passengers by dispensing with internal doors between them to create the effect of one long corridor.

A major challenge for Sydney commuters over the past 50 years has been that traditionally compartmentalised rail cars, including Sydney’s stock standard double-decker suburban carriages, present serious difficulties for anyone travelling with a wheelchair, pram, luggage or bicycles. 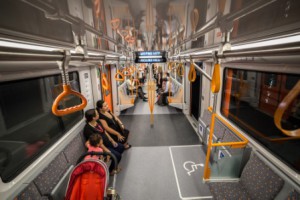 But as the NSW Government tries to get more people using public transport to unclog the city’s notoriously congested suburban roads and freeways, it’s controversially doing away with multi-level trains on new lines in favour of single deck models with more flexible layouts.

That’s because they can fit far more people into them by harnessing open space.

Needless to say the presentation of a life-size model for review goes some way to demonstrating progress to the voting public in the long lead time inherent in heavy rail projects that can span across electoral cycles.

“We’ll take the feedback from future customers on board before the new trains go into full production next year,” Mr Constance said.

“[Commuters will] be able to have their say on internal features like seating, safety, customer information, lighting, the grab poles and hand grips as well as well as how easy it is to move through the carriage and use the multi-purpose areas.”

The Transport Minister also wants community input on the final colour scheme for the train for the train, including “its distinctive front nose section”. 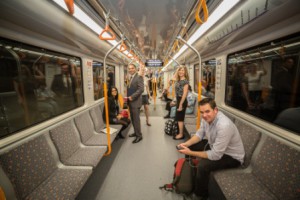 Due to start running in 2019, the new metro trains also usher in what the NSW government calls a ‘three tier’ rail transport network by adding high frequency rapid transit services to the existing mix of suburban and inter-city runs.

Unlike Sydney existing services, the metro rapid transit trains will not have prescribed timetables, relying instead on regular short frequencies. And while transport unions may not like it, the fact that the trains are driverless and automated means that services are not reliant on the availability of drivers or guards, a perennial problem that previously has disrupted services during peak load times.

One of the most simplistically practical features of the metro-trains that will increase their running frequency is their doors – or the fact that there will be three of them.

A longstanding issue with the much loved double decker cars (which actually have three levels) is that although they can carry a large number pf people, their layout of just two doors per side means that the take significantly longer to load and unload at stations, a factor know as dwell time.

According to North West Rail Link, apart from the extra numbers of doors, the new trains will use platform screen doors that effectively create a glass wall between commuters and trains until they are ready to be boarded.

The screens are a major safety advance because they physically protect passengers from falling, getting pushed or jumping onto the tracks where they can be hit by oncoming trains.

The screens also protect oblivious commuters wearing headphones from getting sideswiped by trains as they pull into or leave platforms.

The incidence of people often deliberately putting themselves in the way of trains remains a serious problem for rail authorities, staff   and particularly train drivers   who are often left badly traumatized by critical incidents.

Somewhat ironically, while Sydney’s new platforms will largely eliminate the problem of people jumping onto tracks, the train drivers will no longer be there to receive the benefit.