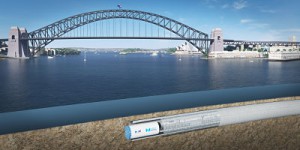 “The first of five tunnel boring machines will be in the ground before the end of 2018 to deliver new twin railway tunnels from Chatswood to Sydenham, as we get on with the job of opening Sydney Metro City & Southwest by 2024,” Mr Constance said.

“We finished tunnelling on Sydney Metro Northwest in January this year, with services on track to start in the first half of 2019 with a new metro train every four minutes in the peak.”

(Of course no rail announcement is complete without an obligatory artist’s impression – and Mr Constance has delivered in spades with a full colour rendition of what digging an underground, underwater and under a bridge might look like if the bottom of Sydney Harbour was largely filled in and made perfectly level.)

The trunking of the new frequency underground through both the CBD and its badly serviced southern fringe has already triggered a frenzy among property developers after the Premier Mike Baird confirmed the government will tear down existing public housing high rise blocks in Waterloo and replace them with mixed public-private developments.

However some developers are less than thrilled at the state government’s use of the so-called “value capture” model to cross fund the new transport infrastructure because they see it as a new tax that potentially dilutes the returns they can make from the uplift in property values that the new rail line brings.

The promotion of value capture as a rail funding base reached fever pitch this week after renowned train travel fan Prime Minister Malcolm Turnbull did next to nothing to hose down speculative reports his government wants to revisit the building of a high speed rail corridor between Brisbane and Melbourne to bring new growth to regional centres like Goulburn and Shepparton.

Not to be outdone by the federal Member for Wentworth on the rail promotion front, Mr Constance is clearly keen to get to get bidders excited and the Metro physically on track for substantial electoral advantage

“As we embark on the formal procurement process for Sydney Metro City & Southwest, this is a further opportunity for industry to work with the government in delivering a truly world-class piece of infrastructure.”

Not that anyone’s been waiting. Long.