Some of Australia’s most famous public libraries are becoming sought after locations for Pokemon GO players, while other libraries are going out of their way to attract Pokemon fans as the craze to catch ’em all explodes.

Now you’re just ask likely to spot Pikachu hiding behind a column as you are to see people studying or combing digital collections.

Pokemon Go has has overtaken Twitter in popularity since it was launched three weeks ago in Australia by app developer Niantic Labs, Nintendo and the Pokemon Company.

It’s a handheld video game which uses GPS and the internet to encourage players to walk around with their smartphones while hunting for Pokemon: Japanese anime characters that have appeared in video games, TV, films, comic books and trading cards.

Since then, demand for the Pokemon Go app has smashed records and drawn every age group into the game in regional and metropolitan Australia.

As Pokemon Go players walk around with their smartphones the phone will occasionally vibrate, alerting the user to a nearby Pokemon.  The monster is caught by throwing a Pokeball, which can be collected alongside other handy free items at a designated Pokestop, often a church, museum, mural or monument.

Some of Australia’s public libraries have been drawn unwittingly into the phenomenon because they are often designated Pokestops, where fans restock their Pokeballs and grab potions and incense to attract monsters.

Libraries have become Pokemon heaven for fans as some players drop lures, an action which attracts a cluster of Pokemon ripe for the catching.

Swarms of Pokemon trainers follow the signal of the delicate pink petals that appear floating on the screen once a lure is in place, giving them 30 minutes to bag their target.

CEO of the Australian Library and Information Association (ALIA), Sue McKerracher, cheerfully admits she spent last night wandering around the National Library of Australia in Canberra catching Pokemon with her teenage son.

She said libraries were seeing a surge in visitors on a Pokemon mission, although not all came through the doors.

“The National Library is an absolute hotspot for Pokemon, particularly the rarer type,” Ms McKerracher said.

Canberra’s Lake Burley Griffin (and the nearby National Library) attract some of the rarer water monsters, like Magikarp, Slowpole, Tentacruel and Tentacruel, making the library a drawcard for fans.

Ms McKerracher said libraries had definitely run with the game and capitalised on its success.

“I was most impressed at how quickly libraries got onto the trend and started to set up and encourage people in. Quite a few social media savvy libraries have got involved already,” she said.

“It’s a great opportunity for libraries to have people who may not normally be library users to go in and look up from their screens for a moment and realise that libraries have changed a lot in the last ten years: multi-media hubs [for example].” 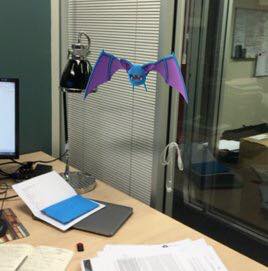 Zubat, hovering over a desk at ALIA

Meanwhile, State Library Victoria has become a premium Pokestop, a transformation which occurs when a huge number of lures have been used in one place.

A spokesman for the State Library of Victoria said there had been thousands of people playing Pokemon on the library forecourt.

“State Library Victoria hasn’t done anything to seed Pokemon play in or near the library. We are simply a busy hub for the game,” the spokesman said.

He said it had got staff talking too: “There have been some corridor conversations, people saying ‘maybe we need to seed some of our spaces for this.’

“Location based gaming has a lot of potential for institutions like us and we will be looking at it and other interactive digital technologies that bring our collections and space to life.”

The craze has taken hold of public libraries in NSW too.

A State Library NSW spokeswoman said NSW libraries were using social media to alert players if they were a Pokestop or Pokegym, or to flag when lures had been set off, by using the hashtag #CatchEmAll.

She said a few libraries were cheering for their favourite teams battling it out in Pokegyms: Team Mystic, Team Valor or Team Instinct. Others had interactive displays inviting library visitors to list the Pokemon they had captured in the library and put up signs welcoming Pokémon trainers.

“We have definitely noticed more people in the library and anecdotally we know they are playing Pokemon Go. We have promoted our Pokemon visitors on our Instagram account,” the spokeswoman said.

She said public libraries were safe places to capture Pokémon and librarians could help out new players.

“Library staff are skilled at finding the answers to difficult questions.  If library clients need advice about how to play the game, how to find PokéStops and gyms in the area, how to set off lures, how to engage in the social media conversation about Pokémon Go and how to submit a location for consideration as a Pokéstop or gym public library staff can help them out.”

Orange City Librarian Sean Brady did not bother waiting for fans to come to the library, he bought lures for $1.49 each in the app, advertised them and set them off last weekend.

“I told people I would be setting them off at a particular time and invited them to come to the library and recharge their phones (Pokemon is a phone battery vampire),” Mr Brady said. 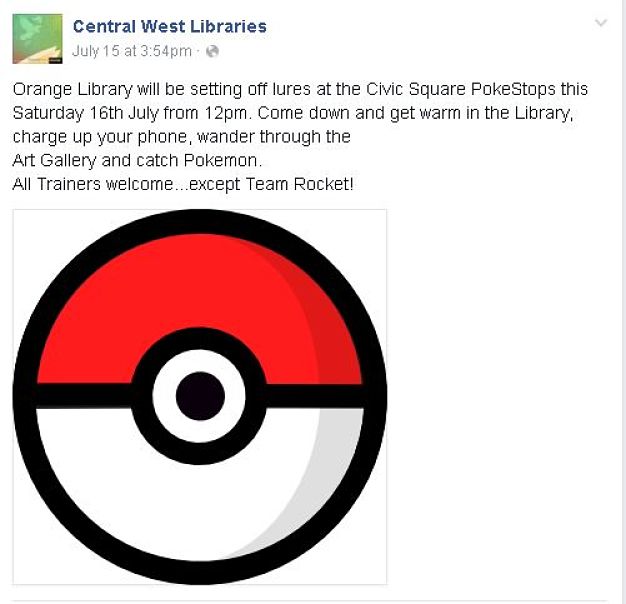 The lures snowballed as people set their own off outside the library.

Mr Brady said the library was considering putting in a request to become a Pokestop but there was already a Pokegym and four Pokestops around Civic Square, where the library is located.

But he said that most people who came in looking for Pokemon were not getting involved with library activities to any great extent, although he saw value in getting people through the library doors.

Niantic has hinted that the app will be further developed to add trading and competitions and Mr Brady said this could be a boon for libraries.

“Once that kind of stuff kicks in I can see more value for us because we can hold Pokemon competitions in the library and provide space where there’s phone charging that’s warm and safe.”

Many libraries get involved with International Games Day and Pokemon could be part of this.