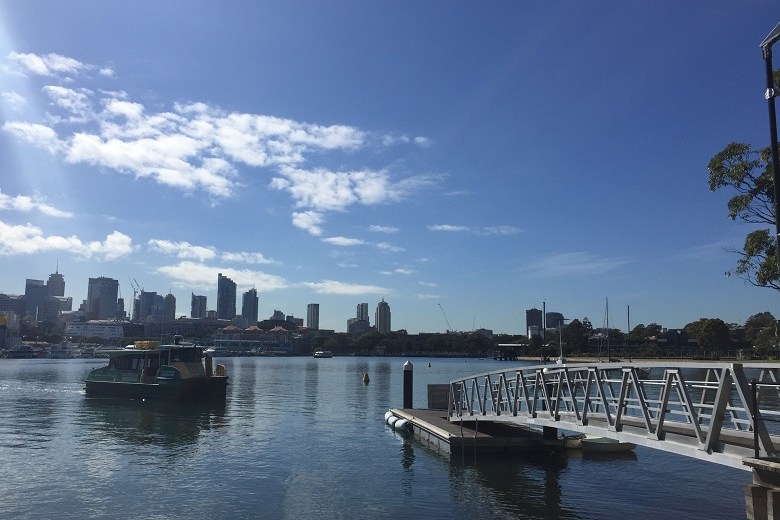 Sydney's new on demand ferry route will be serviced by a new 12 metre MiniCat, which seats 43 customers and has an overall capacity for 60 customers.

The 12 metre MiniCat, which seats 43 and has an overall capacity for 60, doesn’t run to a timetable but allows passengers to book trips up to 24 hours in advance through an app.

Passengers can also make a call at the wharf kiosk, with a ferry arriving within 15 minutes.

The state government launched the trial on October 14.

Backed by the community

NSW MP Jamie Parker has been working with the community for the past four years to get the service up and running.

“The idea for a ferry has been circulating around Glebe for some years, but in 2015, I took this campaign up with the support of the community,’ he told Government News.

“This is a fantastic public transport solution that makes use of our beautiful harbour and actually takes cars off the roads.”

The community campaign was backed by over 5,000 signatures and had the support of local businesses and  the Glebe Chamber of Commerce, Mr Parker said. 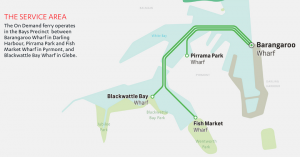 Mr Parker says he would like the service to run beyond the trial period and service more areas in Sydney.

“We have called on the government to make this service permanent and timetabled and to extend it to service to Annandale and West Balmain,” he said.

“It’s my hope that if people in Glebe get out and use this service, the government will realise that this is a worthwhile and necessary public transport option for Glebe.”

“The wharves selected for this trial are not currently serviced by regular ferries so the new on demand service will help to connect this area to a major transport hub.”

Transport Mr Andrew Constance said the Sydney’s Bays Precinct is an ideal location for the trial because it isn’t currently being serviced by regular ferries.

“The Bays Precinct is popular with both tourists and regular public transport customers,” he said in a statement.

“The wharves selected for this trial are not currently serviced by regular ferries so the new on demand service will help to connect this area to a major transport hub.”

Newcastle to trial on demand cars and van

Meanwhile, the City of Newcastle will trial its own on demand transport service at the end of the year, in partnership with public transport provider Keolis Downer.

“It presents a new and flexible way for commuters to make their journey into the city for work and has the potential to remove cars from the city centre, opening up more car spaces in and around the city,” she said in a statement.

“The trial’s aim is to encourage Novocastrians and visitors to take advantage of public transport options in the City.”

Passengers can book a trip through the Newcastle Transport app and be collected from a nearby pick-up point and taken to a local transport hub or area of the city.

Services will operate between the hours of 6.30am to 9am and 2.30pm to 6pm on weekdays, with journeys expected to cost a flat fare of $3.20.

Early last year, the City began a pilot for an on demand eBike service operated by BYKKO. Electric bikes are available for hire at all times from 19 docking stations across the council area, and can be picked up within 15 minutes of making a booking.

Over 500,000 on-demand journeys completed so far

On demand services have been operating around NSW since 2016, when Transport for NSW launched a program to identify and pilot creative ways to deliver transport services on demand.

“Since then, Transport for NSW has granted 22 on demand contracts across New South Wales in both metropolitan and regional areas with the aim of providing more mobility to customers where it’s needed most,” a spokesperson for Transport for NSW told Government News.

Each pilot runs for six months initially, with no minimum patronage numbers required and be extended up to two years.

So far, more than 500,000 on demand customer journeys have been completed. A Northern Beaches pilot that deliver passengers to transport hubs has been the most successful, with more than 185 passenger trips delivered since its launch two years ago, the spokesperson said.

“One of the most important learnings from this trial is to develop tailored services to best meet the needs of customers, with local operators also providing valuable input in this regard,” they said.

Transport for NSW would like to see on demand transport services continuing to evolve and “form part of an integrated transport network that simplifies and speeds up route services”.