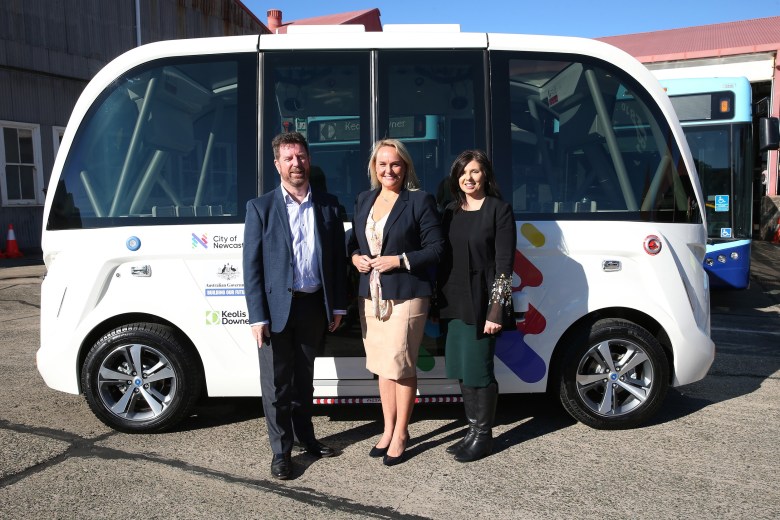 Newcastle City Council’s first driverless shuttle bus is set to hit the roads for testing in what the city’s mayor says is a major milestown in Newcastle’s journey to becoming a smart city.

The 11-seater bus built by the French Navya company was unveiled by Lord Mayor Nuatali Nelmes this week ahead of a 12-month trial which, in an Australian first, will see the fully automated vehicle tested out in traffic and connecting with other forms of public transport.

The delivery of the bus comes after public transport operator Keolis Downer was announced as the successful tenderer for the project earlier this year.

The bus will initially take passengers along a 2 km harbourside loop. A larger circuit taking in other Newcastle beachside attractions is proposed for later in the year.

Delivery of the shuttle is part of council’s Smart City Strategy, which includes a focus on transport including smart parking options, driverless vehicles and electronic vehicle charging stations.

“This is a major milestone for the city’s smart city journey, and I look forward to working with Transport for NSW and partners Keolis Downer on this unique opportunity to make the future of automated transport in Newcastle a reality as we transform the city into a living lab.”

“Over the next month, we will complete a rigorous safety testing program, on road and off road, to prepare the vehicle for customer services,” Ms Wiblin said.

“In-built computers and sensing systems capable of detecting obstacles, anticipating movement and evaluating risk of collision, are what sets this vehicle apart from the risks associated with human-controlled cars.

“These systems are capable of detecting vehicle movement and are also able determine the travel route, make decisions to slow down, brake and alternate the vehicle’s path if required.”

The bus will always have a chaperone onboard who will be able to activate an override system if needed.

Keolis Downer has also overseen a trial of autonomous vehicles at La Trobe University in Victoria, while the third stage of an autonomous vehicle trial at Sydney Olympic Park is being steered by Transport NSW’s Smart Innovation Centre.