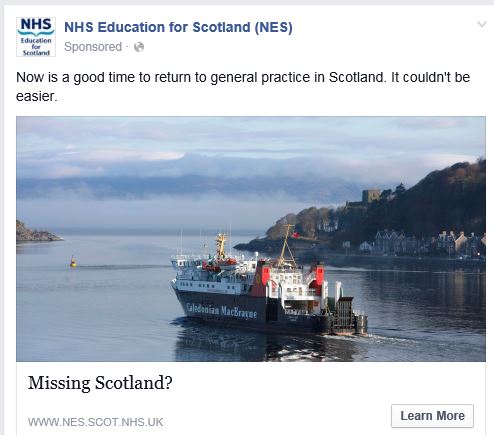 A Facebook advertisement aimed at Scottish-trained doctors who have left the motherland to work in countries like Australia, New Zealand and Canada is trying to lure GPs back to bonny Scotland.

The Facebook ad, which features a ferry sailing between the Scottish mainland and the bucolic islands on Scotland’s west coast, targets doctors aged 34 to 55 who have left Scotland to work overseas.

The ad pops up on the timelines of those Facebook users who have indicated that they have studied at a Scottish university, although they needn’t have completed a medical degree for it to appear.

The National Health Service (NHS) Education for Scotland-produced recruitment ad says: “Are you missing Scotland? Are you contemplating returning? Now is a good time – coming back to General Practice in Scotland couldn’t be easier!”

The social media recruitment drive makes no bones about it – don’t expect blazing sun but at least you won’t be languishing at the end of the earth any more:

“Scotland needs its trained GPs back … why not come back to enjoy our four seasons of weather (sometimes in one day), our diversity of culture and proximity to the rest of the world? Scotland is more than ever a wonderful place to live and work.

“No entry assessments, no additional costs when you can least afford it and no lengthy waits to get back into a substantive post,” it says.

“Your application will be considered by the Health Board Medical Director who will decide whether it would be appropriate to include you immediately on the Performers’ List provided you complete a short practice-based induction or whether you will be required to successfully complete the Scotland GP Returner Programme.”

As an incentive the ad promises to make the process painless and cheap adding that applicants may only need “a simple, two to four week induction programme”.

The NHS is no stranger to poaching its doctors back from the Commonwealth.

The ads urged GPs to come back to the UK and promised a “fully-funded induction and returner scheme”. They were reportedly some of the most successful ads ever placed in Australian Doctor.

The shortage of GPs in Scotland is reported to have reached crisis point, with many GP vacancies and sessional GP vacancies (doctors covering sick leave or holidays) left unfilled, particularly in more remote and rural areas of the country.

In many cases Health Boards have been asked to step in and take over some practices because so many doctors have left or retired and they are collapsing under the patient workload.

The NHS must view with alarm recent statistics from the UK’s General Medical Council which show that an average of 2,852 certificates enabling British doctors to work abroad were issued annually between 2008 and 2014, a total of 19,522 certificates.

The UK’s Daily Express newspaper reported that the average salary of a Scottish family doctor is currently £89,300, but more than half of GPs already earn in excess of £100,000. It is difficult to compare this with the average earnings of Australian GPs as they work under a different system where they bill, rather than draw a salary.

Government News has approached the Royal Australian College of GPs for further information.