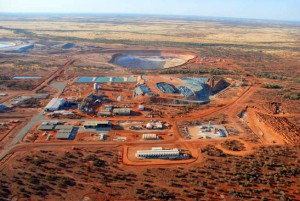 Australia’s growing solar energy industry might not have much support from Prime Minister Tony Abbott and Finance Minister Mathias Cormann, but parts of the nation’s influential resources sector are conspicuously backing new off-grid solar battery storage deployments as a means to reduce their operating costs and keep remote mines viable.

Mid-tier miner Sandfire Resources has revealed it will tap into a $15 million finance package from the Clean Energy Finance Corporation  to power up its DeGrussa copper mine, located 900km north-east of Perth in Western Australia in what promises to be Australia’s largest combined solar and battery storage plant to date.

The launching of the new solar storage plant is an important milestone for the solar and resources industries — as well as remote towns — because it conspicuously demonstrates how combining the two technologies can offset expensive diesel fuel electricity generation costs at a commercial level.

The cost of power and energy in remote communities remains a major challenge to their economic viability because of the high cost of regularly trucking in fuel or maintain power lines over big distances.

According to the projects backers “energy can account for around 30 per cent of operating costs for remote area and off-grid Australian miners, which rely on diesel-fired generators.”

“Rising production costs, global competition and the drive to improve overall environmental performance are motivating leading resource companies to look to the potential of renewables as a means of making energy cost savings, increasing the energy security of their operations and achieving an overall improvement in environmental outcomes,” the CEFC said in a joint media statement.

What the giant new solar storage rollout by a mining company also vividly illustrates is that the financially hard-nosed resources sector is far from hostile to the adoption of the kind of alternative energy technologies being promoted the politically besieged Clean Energy Finance (CEFC) Corporation and the Australian Renewable Energy Agency.

The Abbott government came under renewed heavy fire this week from both the solar industry and some parts of the electrical sector after it sought to heavily limit the activities of the profitable CEFC by restricting it to large scale solar projects and bounce it out of lending for smaller scale solar deployments like rooftop installations. Wind energy was also a major target.

While the CEFC is now in the process of taking legal advice on whether and to what degree the Abbott government can control and restrict its activities under existing laws, industry players are clearly warming to any assistance in helping them reduce operating costs.

The heart of Sandfire’s big solar storage play is a $40 million 10.6MW solar plant with 6MW of battery storage at its WA mine that is also supported by a grant of $20.9 million from the Australian Renewable Energy Agency (ARENA).

The chief executive of ARENA, Ivor Frischknecht said the project was part of a small but growing number of renewable powered mines around the world served as a world leading example that could drive further advancements.

“Remote industries in Australia currently rely on 1.2 GW of power from diesel fuel that is prone to price volatility and supply interruptions. Renewables are already competitive with fossil fuels in many off-grid applications, offering a strong, secure and reliable alternative to trucked-in diesel,” Mr Frischknecht said.

The chief executive of the CEFC, Oliver Yates was also hard selling the potential for solar to offset diesel.

“This is an important project showing the significant potential for off-grid renewables in regional and remote Australia. The solar and battery storage combination offers the opportunity to reduce the reliance on diesel-powered energy in remote area mining,” Mr Yates said.

In terms of specifics of the DeGrussa combined solar storage project, the system runs an off-grid high capacity solar power array “which will be fully integrated with an existing diesel-fired power station.”

“It will involve the installation of 34,080 solar PV panels covering over 20 hectares, using single axis tracking technology. When it becomes operational in early 2016, the solar facility is designed to provide the majority of Sandfire’s daytime electricity requirements, offsetting about 5 million litres of diesel fuel per annum and abating over 12,000 tonnes of CO2-e annually,” the CEFC said.

Sandfire’s managing director, Karl Simich, was similarly talking-up the new project and the assistance of the two government agencies, carefully navigating around the political pugilism.

“Sandfire is pleased to be participating in this project as part of an extensive consortium which brings together the expertise of some of the world’s leading renewable energy companies, backed by significant funding provided by ARENA and the Clean Energy Finance Corporation,” Mr Simich said.

“We identified some time ago that solar power presented an exciting opportunity for us to participate in a low-risk renewable energy initiative at DeGrussa and we have no doubt that this project has the potential to be an Australian and possibly a world first –establishing DeGrussa as
a reference site for the use of off-grid solar and battery storage technology in the mining industry.”

Who’s who in the Sandfire DeGrussa plant:

Sandfire Resources NL
Sandfire Resources, operator of the “the high-grade, low cost” DeGrussa Copper-Gold Mine slated to have an annual production range of 65-68,000 tonnes of copper and 36-38,000 oz gold.

juwi Group
International renewable energy company that specialises in the “Engineering, Procurement and Construction” (EPC) of utility scale projects. Has been involved in the development, design, construction and operation of more than 1,500 solar PV projects and the installation of more than 800 wind turbines with a cumulated capacity of over 3,400MW.