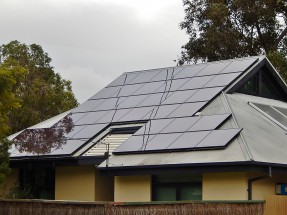 Solar powered battery packs to store away on-call household electricity are likely to be an attractive investment for property owners in less than five years, new research from one of Australia’s leading sustainable energy think tanks has found.

But it’s smaller batteries that will tip the balance according to the Household Storage Analysis report, commissioned by the Alternative Technology Association, because an increase in size doesn’t necessarily correspond to an accelerated payback period according to the landmark report.

The research paper is more grim news for state owned and privatised transmission networks that are facing a major financial hit after a raft of overinvestment in poles and wires that was meant to pay-off through increased electricity usage that has often failed to materialise.

The miscalculation means that as electricity prices rise, consumers seek to reduce their consumption by using energy saving measures ranging from LED light globes to better insulation and solar panels.

The potential for households to severely constrain their consumption of electricity drawn from the grid through technologies like solar battery storage is both a threat and an opportunity for network providers depending on how they tackle the new technology.

Companies like Queensland’s Ergon Energy are already testing battery systems on residential houses – which are owned by the power company rather than the resident – to determine if they can be thrown into the generation mix.

But behind the dream of fed up consumers going off grid and telling their power company to stick their bills where the sun doesn’t shine, the early results appear mixed.

The new ATA report, which does the numbers on what it says is the economic value of adding batteries to a new grid-connected solar system for a range of scenarios, looked at scenarios across 10 Australian locations modelled electricity consumption data for “typical working couples and young families, three different grid tariff types and different sized solar systems.”

And while there’s a real value equation just around the corner, the report cautions that the systems are not a “one size fits all” solution because of varying conditions and lifestyles.

“There’s a lot of hype in the community about battery storage, and while we think it is a great thing, we urge people to understand their own electricity consumption patterns and choose the most suitably sized and designed solar and battery systems,” said ATA policy and research manager Damien Moyse.

“At today’s prices, most Australian households won’t be able to achieve a 10-year return on their investment – which is the typical lifetime of a well-designed and operated battery system. But by 2020, this will change for an increasing number of homes.”

Even so, the ATA says it’s power saving rather than storage that can have the biggest payback and Mr Moyse urged people to keep household energy efficiency firmly in mind when considering battery energy storage.

“Having a more energy-efficient home will mean you need smaller sized batteries, which will ultimately be better for your overall energy costs and the environment,” Mr Moyse said.

“Batteries need to be considered in the context of an overarching, holistic energy management approach – whether that be for a household or business.”

One of the prospects raised by the ATA report is that electricity network providers could drive down the cost of battery storage by entering the market themselves.

“The economics of investing in storage would obviously be improved if households were paid to provide and share in associated benefits to the electricity grid (particularly those associated with peak load management),” the report said.

The big question for overcapitalised providers is whether buying into battery storage would boost customers and usage or merely expedite a financial train wreck.

One scenario put-up by the ATA contests that there could be a benefit at times of heavy load when systems sag under the demand of air conditioning units on extremely hot days when transmission can be impaired or even shut down.

The ATA report says energy companies could co-invest in such systems, for example:

•On critical days, company controls the batteries remotely, discharging them at peak times;

•Energy is sold on the spot market at high prices.

Any improved capacity to better load balance at critical times is likely to be appealing to state governments which have to deal with the consequences of brownouts and blackouts on networks.

The ability for households and businesses to have what amounts to a reserve tank would also go some way to improving resilience during extreme weather events when lines get cut or blown down.

The reliable supply of electricity is also a major concern for households hooking up to the National Broadband Network Fibre-to-the-Premise (FTTP) service because the optical fibre connection needs an external power supply because, unlike copper, the glass cable doesn’t carry electricity.

The solution to that telecommunications problem is . . . you guessed it . . . installing rechargeable batteries.