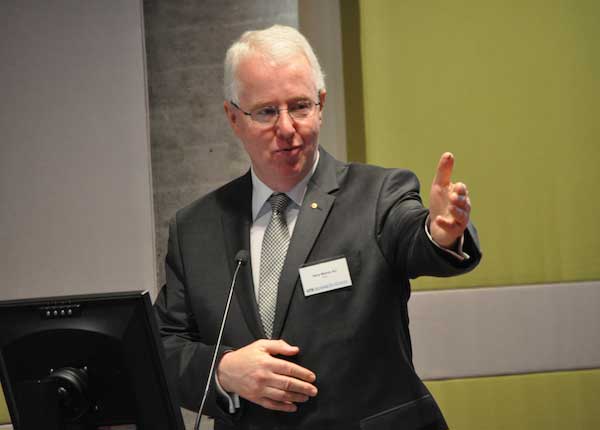 The Federal Budget announcement that more than 7000 public service jobs will go means a leaner public service will have to find ways to do more with less. But speakers at the launch of a report on public sector innovation said those same job losses could become another barrier to change.

“When we started this report, when it was first commissioned, there would have been a feeling that innovation was a ‘nice’ thing to have — it perhaps wasn’t as pressing a challenge as it is right now,” said Professor Roy Green, co-author of the report Australian Public Sector Innovation: Shaping the Future Through Co-Creation.

Terry Moran, once Australia’s most senior bureaucrat as Secretary of the Department of the Prime Minister and Cabinet between 2008 and 2011, said public servants had to feel free to fail occasionally, otherwise they would not take the risks that lead to innovation.

However, Helen Conway, Director of the Workplace Gender Equality Agency said this was difficult in an environment where the equivalent of 7336 full-time jobs were to be cut in 2014-15.

“This report is such a significant piece of work at, I think, a critical time for the public sector,” Conway told the launch.

“It is very difficult at the moment, with the circumstances that prevail in the public sector, to encourage innovation at lower levels.  People see little incentive at the moment.

“If you go to Canberra … people are very much in siege mode and there’s a lot of ‘I’m just going to put my head down and ride out this storm’. In those circumstances it is very difficult for people to think expansively, act expansively.”

‘This is such a significant piece of work, at a critical time for the public sector’

Yet the Shaping the Future report says the public sector must become a leader and enabler of innovation in Australia, constituting as it does about 35% of GDP and with its pervasive role in the economy and society.

“It should have the capacity to prototype and diffuse models of change and innovation, as well as work with the private and community sectors to address the major challenges we face,” the report says. “As we confront faster rates of change and more complex problems, creativity and new ideas are essential.”

Developing a public sector-specific culture of innovation is the key, it says, rather than trying to “plug and play” from the private sector.

“The question we keep coming back to is the question of culture,” Prof Green said at the report’s launch. “How do we generate organisational culture in our public service that is predisposed to innovation, even within what are acknowledged to be necessary constraints of accountability and regulatory compliance?”

Moran, who is President of the Institute of Public Administration of Australia (IPAA), which commissioned the report, spoke of seven barriers to such a culture, including an “obsession” with centralisation and “micro management” by ministers and their departments.

On risk taking, he said “the higher the administrative discretion is located, the more cautious are the choices”.

“So if a discretion has to be taken by a head of a department or a minister, those discretions normally will be cautious and risk averse and are in their totality going to emerge as a major constraint on the ability of those further down in that system to innovate.”

‘The silos can often work very hard to prevent innovation’

Compounding that was “media-driven ministerial activism”, where “in many areas of government, ministers think they should somehow be able to reach down and touch the local level and sort out a problem”, rather than letting the people on the ground take responsibility.

“Ministerial departments still haven’t got the message that they don’t have to try to control or influence everything,” he said. “Until they, frankly, shrink in size and clarify their role, they won’t allow agencies and service delivery organisations at that local level the rights or opportunity to get on and do the job – with innovation – that society needs.”

The existence of “silos” was another obstacle to innovation, he said, with individual departments and agencies not always working together towards common goals. “The silos aren’t joined up and can often work very hard to prevent innovation happening,” he said.

There needed to be much more freedom at the local level to decide how to use resources. This would require a big investment in new systems and management capabilities, along with a more sophisticated approach to planning.

But, despite such barriers, Moran said he remained an optimist because debate was clearly under way about who could best deliver services, and how.

UTS Business School Adjunct Professor Don Scott-Kemmis, also a co-author of the report along with Adj Prof Göran Roos and Dr Renu Agarwal, told the launch that in a fast-changing world, the traditional public service approach of planning was hitting its limits.

“Planning is based on prediction. When things are moving fast we can’t just plan and execute,” said Adj Prof Scott-Kemmis. Instead, “open” innovation – learning from others — and experimentation were important.

“Whether we are talking about a company, or a public sector organisation or, indeed a country — and I am very much thinking about Australia here — we will be a product of the challenges we take on and how well we deal with them,” he said.

This article by Lesley Parker was originally published at UTS Business School.