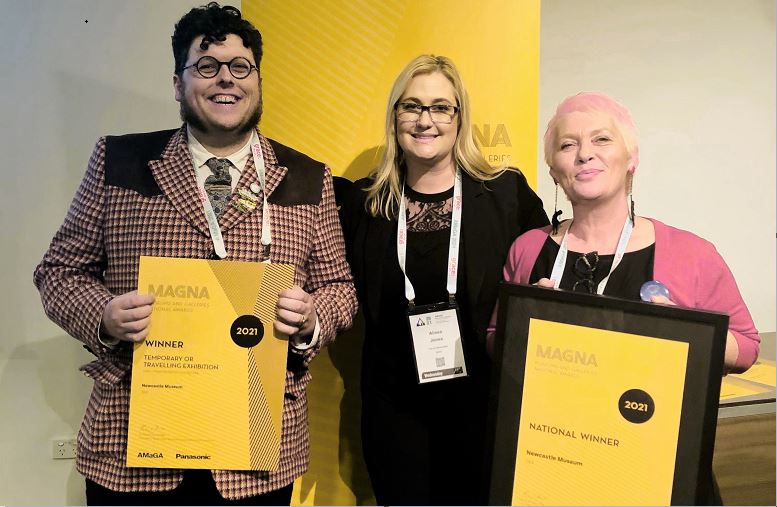 Newcastle Museum has become the first local government-run museum to take out overall winner at the national museums and galleries awards.

It’s a huge coup for the regional museum, which was named the most impressive entry from 42 finalists across 16 categories for its 1X4 social history exhibition at the MAGNA Awards.

In winning the top gong it managed to beat out giants like the National Museum of Australia and the National Maritime Museum, which had budgets of more than half a million dollars each.

It also won the Temporary or Travelling Exhibition Award in its budget category.

The awards were presented on Wednesday night at the AMaGA national conference in Canberra.

The 1X4 exhibition features 23 items from Newcastle Museum’s own collection including a brass model locomotive, a pigeon trophy and a lace gown. Each item has four different stories attached to it, which can be explored via mobile phone or audio tour, as well as a choice of music.

The exhibition, put together by curator David Hampton with a budget of less than $20,000, was conceived and created locally despite challenges presented by covid-19.

“IX4 is an innovative, collection-rich, social history exhibition and website exploring the multiplicity of narratives each object can tell,” she said.

Local government on the cultural map

Mayor Nuatali Nelmes said it was one of the most significant cultural awards Newcastle had ever won and was testimony to museum director Julia Baird and City of Newcastle staff.

“Newcastle Museum is on the cutting edge of contemporary museum practice, creating insightful and immersive ways to interpret and preserve our city’s fascinating history,” Cr Nelmes said in a statement.

She also applauded the recent selection of Ms Baird as Vice President of the National Council for the Australian Museums and Galleries association, saying her appointment acknowledged the importance of local government-funded museums ion the cultural landscape.

The exhibition, which closed in Newcastle last month, will now go on tour with three museums adding it to their touring exhibition program. First stop is Randwick City Council’s La Perouse Museum in September.

Local government-funded museums in Canada have also been in contact for advice about creating their own version of the concept.

Newcastle Museum also took out the Program Website Level A award in the Museums Australasia Multimedia and Publication Awards for excellence in publications and multimedia in the museums sector.