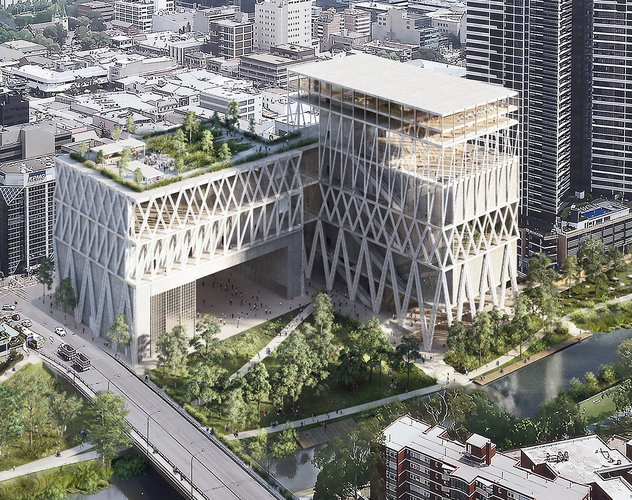 A building that would have raised exhibition spaces above the flood zone and one that would have saved two heritage sites from destruction were both knocked back by judges deciding on the new Parramatta Powerhouse Museum.

The finalists in an international competition to select the designer of the relocated museum have been revealed six months after the winner was announced.

An Enivronmental Impact Statement also released this week gives the go-ahead for construction of the winning design, which will include demolishing two historical buildings.

Among the four designs that didn’t make the final cut was a “beautiful and poetic” design submitted by AL_A and Architectus, which would have lifted the exhibition spaces out of the flood risk zone.

However, the judges noted “operational concerns” with the suggested layout and apprehensions about the practicalities of the proposed façade and the building’s environmental strategy.

Meanwhile, an offering by US firm Steven Holl and Australia’s Conrad Gargett would have retained the two heritage buildings for cafes or restaurants.

But the judges said this didn’t seem compatible “with any argument for retention” and described the juxtaposition of the very large museum building and smaller heritage structures as “jarring”.

Bernardes Architecture, from Brazil, and Scale proposed a “distinctly Brazilian approach to public space” but the judges said the building failed to convey “a sense of Parramatta’s DNA” and didn’t quite understand the local culture.

All Australian partnership Chrofi and Reko Rennie broke their design down into a series of separate high-rise buildings which the judges said lacked engagement with local communities.

The judges also expressed concern about plans to put a basement in the flood plane, which they said would be susceptible in a worst-case flood event.

The state government on December 17 announced a French-Australian architectural partnership as the winners after they submitted plans for “a hyper-platform” stilted building opening towards the Parramatta River.

The EIS appraising the development application for the building notes the site of the proposed new museum is subject to flooding as it sits within the Upper Parramatta River Catchment. But it says a risk report found the design of the building didn’t present any increased risk to public safety.

It also notes that two heritage buildings dating back to the 1800s, Willow Grove and St Georges Terraces, will have to be demolished to make way for the new museum.

The report concludes that the potential impacts of the development are acceptable and “given the planning merits of the proposal, the proposed development warrants approval by the Minister for Planning and Public Spaces”.