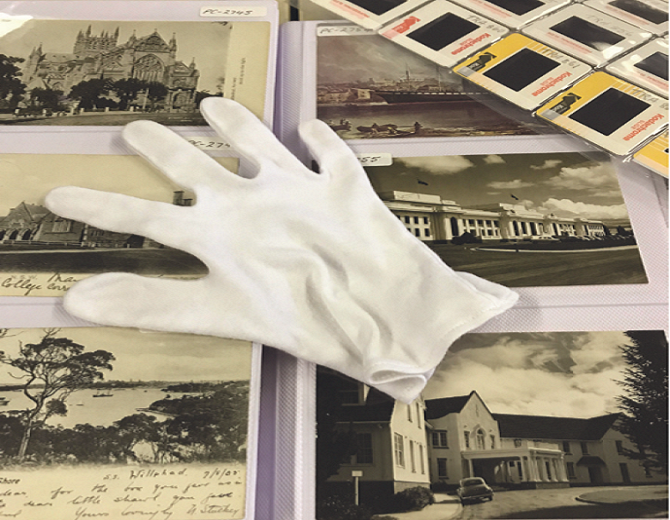 Postcards and transparencies at the Royal Historical Society of Victoria. Photo: Wendy Quihampton.

A network of local museums is collaborating to preserve valuable heritage collections online as part of a national initiative.

Located 265 kilometers outside of Melbourne, the small coastal town of Warrnambool has a rich historical collection that includes artifacts dating back to its time as a critical port during the 1850’s gold rush.

With more than 13,000 items in their collection – from art to badges and manuscripts – the Warrnambool and District Historical Society (WDHS) is one of the community museums across Australia working to preserve historical items online as part of a digital access to collections initiative.

The initiative was born in 2016 when GLAM Peak, the representative of galleries, libraries, archives and museums sectors in Australia, received funding from the Commonwealth to help cultural institutions, regardless of their size, progress digital access to their collections.

WDHS, a volunteer-run institution founded in 1966, is one of a number of local museums that have progressively made their collection digitally accessible through their website, Victorian Collections and Trove.

A remarkable three quarters of the museum’s collection is now catalogued, with the online exhibition including photos of 19th and 20th century steam ships that tell an online story.

President of WDHS Janet McDonald says the online collection has boosted the town’s profile, with a number of interstate and national enquiries resulting in increased tourism.

“It’s really surprised us the number of people who contact us through our collections,” Ms McDonald tells Government News.

“We have a website with an inquiry sheet and as soon as we started to put things on the Victorian collection people would Google a name and we immediately started to get a lot of inquiries.”

The digitisation of local historical items has also democratised access to museum collections by taking geographical boundaries out of the picture, she said, pointing to overseas inquiries.

Meanwhile, an offshoot of GLAM’s digital access initiative, the Sustainable Collections Project, is spearheading a collaborative local government cultural heritage network to encourage digitisation projects, such as that of WDHS.

The initiative currently supports 15 organisations to progress digital access to their collections.

Alex Marsden, national director of Museums and Galleries Australia and co-convenor of GLAM Peak, says the project aims to help community museums digitise collections while working with councils to improve planning and coordination of museums.

“We’re approaching how digitally discoverable Australia’s collection is on a number of levels – from a draft national framework to a bottom-up program targeted at regions to give them advice and support on how to do digital access work.”

For more than 11 years, the project has been working with local museums to digitise collections across the Cabonne, Blayney and Orange local government areas, with each council contributing $15,000 per year to the project, administered by Orange City Council.

Golden Memories Museum Millthrope is one museum taking part, which has catalogued 35 per cent of its collection of 20,000 items which allows the public to access the museum collections on a website.

The museum has been open since 1965 and now operates with a team of 20 volunteers who curate an eclectic collection that includes paper-based archives, farm machinery and social history items. With the help of a $5,000 grant from Blayney Shire Council, the museum has been able to employ a part-time collections manager.

“We have a good collection of items from our local Aboriginal group, the

Wiradjuri people, as well as items from early European settlement. Millthorp was settled early after Bathurst so there’s a lot of history here,” she said.

However, while museums increasingly look to digitise access to historical collections, the value of physical exhibit spaces won’t be lost, Ms McDonald said.