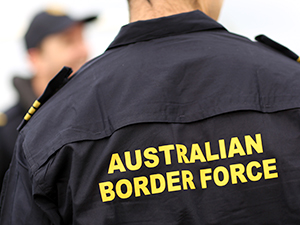 Australian Border Force officials fear the federal government has made them  political pawns and targets for violence in the wake of public hysteria surrounding a planned stop and search visa operation in Melbourne last weekend, says the Community and Public Sector Union (CPSU).

The aborted and widely reported Operation Fortitude exercise in Melbourne has attracted criticism from many quarters. The protestors who took to the streets led to the operation being cancelled, and recriminations continue over who was responsible for what is widely seen to be a major error of judgement by the newly created Australian Border Force (ABF).

It may also add to simmering tensions between staff and management within the ABF. The Community and Public Sector Union (CPSU), the union representing ABF workers, issued a statement welcoming the news that Operation Fortitude was cancelled, and criticising the Government for ‘politicising’ ABF staff.

“The union has been contacted by ABF members who raised concerns their safety would have been compromised by the publicity surrounding this operation,” said CPSU National Secretary Nadine Flood. “Some members are deeply concerned about the way their work has been politicised, raising safety concerns about the public reaction.

“While the ABF, as the Department of Immigration and Border Protection, has been involved in these types of operations before, they have never been publicised in this way. Our members were deeply concerned at the suggestion they would be stopping all people on the street, which is not how their work has been done in the past.”

The ABF only came into being on 1 July 2015, formed from the merger of the Australian Customs and Border Protection Service and the enforcement areas of the Department of Immigration and Border Protection. The words ‘border protection’ were added to the name of the Australian Customs Service by the Rudd Labor Government in 2009, and to the Department of Immigration by the Abbott Coalition Government in 2013.

ABF head Roman Quaedvlieg has subsequently said that the original Operation Fortitude press release which warned that ABF officers would stop people at random (“anyone who crosses our path”) was “clumsily worded” and only “cleared at a low level in the organisation.” Prior knowledge of the intended operation has been denied by the Minister for Immigration, Peter Dutton, despite the press release twice being sent to his office before the planned operation.

“ABF staff do important work stopping drug importation and targeting organised crime and terrorism,” said Flood. “Making them a public target through this sort of hysteria is completely unacceptable.

“This high-profile approach has come as a major shock for ABF staff. Their work is challenging under most circumstances but this adds another and unnecessary layer of difficulty to an already taxing task. We are calling on the Federal Government to stop cynically exploiting the work of the Australian Border Force for its own political ends, potentially putting these officers at risk.”

There is no suggestion of industrial action over the matter but it is unlikely to improve relations between management and staff unhappy at the ABF being turned into a paramilitary organisation. The union says ABF staff are frequently instructed not to wear their uniforms in public due to safety concerns.

The CPSU has called ABF staff out on strike once already in the two months since it was formed. In early August industrial action over pay and conditions caused disruption at airports around Australia.

The creation of a military style Border Force, with black uniforms and armed officers, has been criticised by civil libertarians, the Australian Greens, and many others.

“It is inconsistent with democratic principles to establish an armed border paramilitary agency subject to political whim and lacking effective independent oversight,” says the Council of Civil Liberties.

The legislation establishing the ABF was passed in May 2015 with the support of the Labor Opposition.