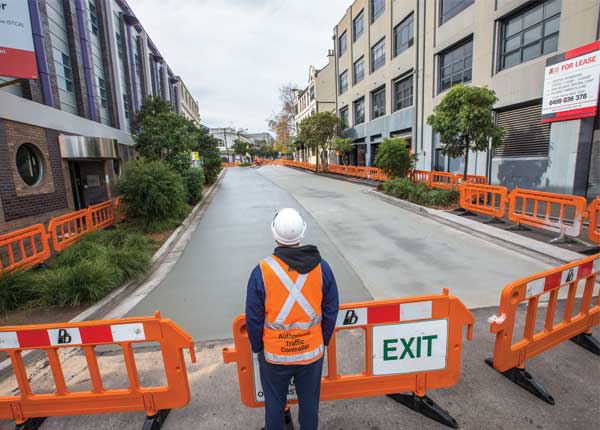 No Australian summer is ever really complete without the scalding sting of overheated bitumen on bare feet, but that could be about to change for some residents of inner Sydney who will have their streets recoated with light coloured surfacing to try and dial down radiant heat that emanates from within.

The City of Sydney has said it will soon start road-testing a new plan to replace traditional dark or black street surfacing with a new, much paler coating to combat what is known as the ‘urban heat island effect’ that can increase inner city temperatures as roads store-up and discharge absorbed heat from the sun.

The plan to recoat roads is part of a wider initiative to reduce carbon emissions and global warming as well as bringing more comfort to pedestrians, residents and lowering the costs for businesses.

Part of the problem with hot roads is that the heated air they contribute to flows through to nearby houses and businesses, in turn prompting people to turn on or dial up costly air conditioners that also push heat back into the air.

The City said the new paler sections of road will be composed of open grade asphalt pavement that will be filled with concrete slurry, to provide a lighter texture on the surface.

Under the trial, the City said it will record temperatures across different locations in the suburb of Chippendale, including a 600-square-metre section of Myrtle Street, and monitor them to check if there is a reduction in ambient temperatures concurrent with paler pavement installation.

City of Sydney Lord Mayor Clover Moore has related the trial to the City’s concern about global warming, warning that temperatures in Sydney were expected to rise in coming decades due to both the city’s growth and the effects of climate change.

“Our cities are growing rapidly in size and population and our increasing energy consumption, carbon emissions and household waste is straining the natural environment,” Mr Moore said.

“Materials such as concrete and cement store more heat than natural surfaces, absorbing it during the day and releasing it at night, which can contribute to hotter urban areas,” Mr Mobbs said.

He said black-coloured roads and a lack of tree cover can increase the heat of cities by up to eight degrees, and lighter coloured pavements may result in lower energy bills for surrounding buildings.

The phenomena of darker colours absorbing heat from the sun isn’t limited to roads.

The issue extends to residential rooftops, where a common feature in many newer urban developments are black or dark coloured tiles that also store substantial amounts of heat.

However a trend has now emerged where councils have been exploring the use of so-called “cool roofs”, which are a lighter colour than their darker counterparts.

The City of Melbourne has been active in its pursuit in using cool roofs, drawing upon research conducted by the University of Melbourne, through its 1200 Buildings Program.

The City has used the program to encourage and support developers, building owners and facility managers to use cool roofs to improve their energy efficiency.