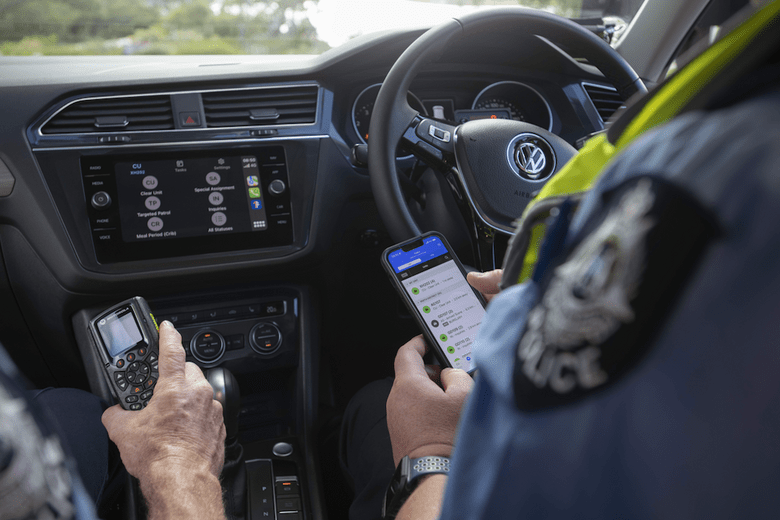 WA officers will use Apple's CarPlay app in a world first for operational policing.

WA police will soon be using Apple’s CarPlay app to access police data, manage operational workflow from their cars and use voice commands to manage their response to incidents.

The government says the technology will enable police to respond to emergencies more quickly and arm them with better knowledge of unfolding incidents.

The CarPlay app, first released in 2014, was designed to allow users to control and view certain iPhone apps via a car’s dashboard media system.

This is the first time it’s being used for operational policing anywhere in the world.

The app will be linked to officers’ iPhone 11 devices, which were issued to them as part of a $34 million rollout from the government in 2019.

The initiative extends the WA Police’s Digital Policing Program app OneForce Core, which allows officers to conduct a range of policing activities out in the field.

The OneForce Core app is being used by more than 5,000 of WA Police’s frontline officers and has assisted the agency’s transition to digital traffic infringement notices, removing the need to process up to 180,000 handwritten infringement notices every year.

Police Minister Paul Papalia says the app is a “major boost” to policing.

“(It) will ensure our police have the latest and most up to date information to rapidly respond to incidents in the community,” he said.

Stamping out illegal mobile phone use

WA isn’t the only state integrating new technologies into everyday policing, with the operators of an AI-based program used in NSW to catch motorists illegally using their phones recognised at a global trade show this week.

Traffic technology provider Acusensus on Tuesday won the Inspiration Award at the Intertraffic trade show in the Netherlands for its Heads-Up technology, which automatically detects illegal phone use via fixed or roadside smart cameras.

The NSW government launched the program in 2019 to catch and prosecute drivers for illegal mobile phone use via a combination of autonomous high-res photography and IA.

NSW data shows a 22 per cent drop in fatalities since the program began, which is the equivalent of saving 93 lives based on past road trends.

Infringements have also fallen, from 1 in 82 drivers during the program’s initial rollout in 2019 to approximately 1 in 478 to the end of October 2021.

The technology is also being used in Western Australia and Queensland, with the northern state using the cameras to also detect seatbelt infringements.

Acusensus is also working with traffic authorities in the UK, US, Spain, The Netherlands, Belgium, South Africa and India.

It will also provide estimated travel times on key routes based on current traffic conditions.

The app will cover the major routes through Hobart and Launceston, with further expansion planned.

The app works by collecting information from Bluetooth beacons placed along routes for traffic monitoring and data collection and alerts users via the Bluetooth connection in their phones.

The alerts are delivered either through the phone speaker or the car’s audio system, informing road users how much extra time their journey is expected to take.

According to the government, no personally identifiable information is collected or stored by the app or the Department of State Growth.

The app is part of a broader program to use smart technology to better manage the road network, with more initiatives to roll out in the future.