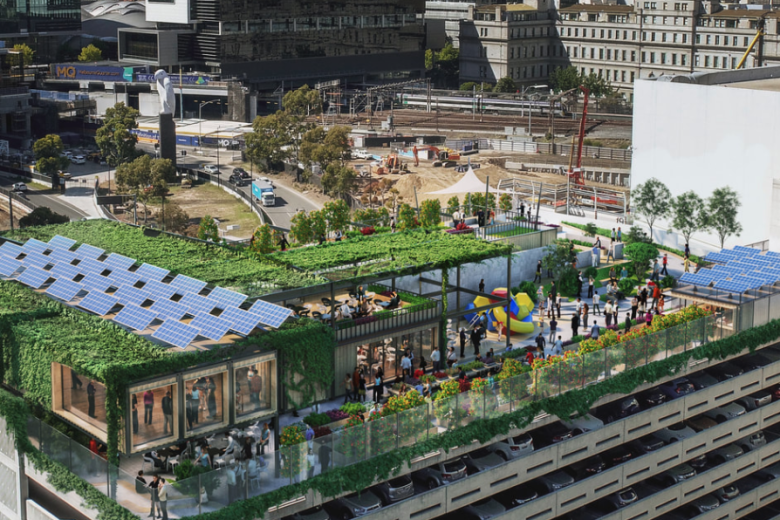 Melbourne will soon have a new public rooftop farm.

City of Melbourne Council has approved plans to transform a car park on top of a city building into a 2000-square-metre urban farm.

Known as the Skyfarm, the project will sit atop a new $450 million development at Melbourne’s Docklands directly overlooking the Yarra River, with a nursery, beehives, eco education centres, a shop, sustainable café and even a live music venue.

The plans were unanimously approved by council at a Future Melbourne Committee meeting last Tuesday, where a plan to create more ‘urban forests’ across the city was also endorsed.

The farm, funded with $300,000 from Melbourne’s Urban Forest fund, will produce five tonnes of produce each year – which will be used to supply the café and donated to charities like Aus Harvest.

The project, set to be completed as soon as late next  year, is a collaboration between urban farm specialists Biofilta, not-for-profit Odonata and the Sustainable Landscape Company.

Brendan Condon from Australian Ecosystems told council that the farm is inspired by New York’s Brooklyn Grange – a community farm which is a hybrid commercial and philanthropic space.

“We believe the proposal represents an exciting opportunity to revitalise the rooftop of an existing building and provide a working example of urban farming in Melbourne central city,” Josh Maitland from Ethos Urban told council.

It’s hoped the farm will act as a cool space in the city to counteract growing carbon emissions.

The approval comes after council last week injected $1.9 million to implement the first year of its Green Our City Strategic Action Plan.

“We will work with the Victorian Government to create a demonstration green roof in the central city and increase the quality of green roofs and vertical greening across the municipality. There are currently around 40 green roofs in the municipality,” environment portfolio chair Clr Cathy Oke said.

Councillors received a number of objections to the proposal, with most citing concerns about noise pollution, light pollution, waste and privacy intrusions.

But the committee was told that the venue will be noise-insulated and equipped with dim lights. There will also be limits on patron numbers to avoid disrupting neighbours.

Nature in cities to become the norm

“Melbourne Skyfarm represents a fundamental shift in what is means to do business in this day and age. It is a bold and exciting step towards a future where nature in cities is the norm,” he said.

“It is a demonstration of how nature, people and our economy can thrive together and provides a much needed platform in the inner city for interaction, education and story-telling about the wonders of nature.”

The farm will also divert waste produced during the coffee roasting process to a composting system which will be used to grow food.

High-tech classrooms will be used at the farm to educate students and community groups about sustainability.

Marc Noyce, director of Biofilta, said the project is an illustration of the integration of urban landscapes with sustainable design.

“Melbourne Skyfarm is the perfect site to show how cities can build abundant urban farms in any location, and become prolific closed loop food producers.”

One thought on “Melbourne gives green light to city skyfarm”