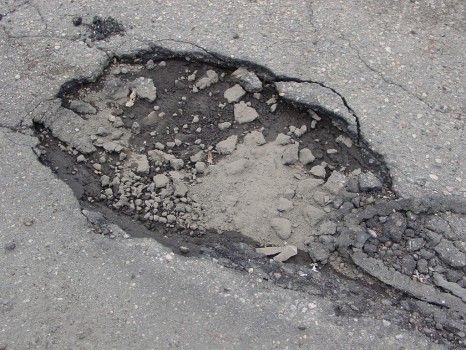 If you ever thought the number of problem potholes and bumpy bridges on regional roads just seems to keep growing, you’re in good company.

At least $11.6 billion in roads and bridge infrastructure maintained by cash-strapped councils across Australia are now in a poor to very poor condition according to the latest stocktake of public works assets from the Australian Local Government Association (ALGA).

The gargantuan figure comes courtesy of the 2013 National State of the Assets Report released at at ALGA’s 14th ‘National Local Roads and Transport Congress’ now being held in Alice Springs, where hundreds of councillors and council staff have converged to try and get better bitumen within their boundaries.

According to the ALGA report, the biggest area of concern are the $8.3 billion in sealed roads, $1.9 billion in unsealed roads and $1.4 billion in concrete and timber bridges that all need work.

“More than 10 per cent of sealed roads are in poor condition and a large proportion of timber bridges are substandard,” ALGA president Felicity-ann Lewis said.

“We can’t afford to have substandard local roads and bridges. These are the gateways to and from our communities. They provide access to local, regional, state and national services and markets and play a vital role in driving our economy,” Ms Lewis said.

The big problem for local government is that although it manages by far the greatest amount of road by the kilometre, the revenue to keep them in safe working order just isn’t there and the shortfall is creating infrastructure backlog of around $1.2 billion a year.

Although successive federal governments have supported the multi-billion Roads to Recovery, the funding from Canberra simply hasn’t kept pace with the combination of increased traffic, wear and tear and weather related damage.

A big overhead for councils has been the increase in truck traffic, particularly in the minerals sector and its supporting industries, that has placed increased pressure on regional roads.

The reduction and better control of truck traffic – and the costs it generates – is a major ambition of the National Heavy Vehicle Regulator which aims to give councils control over gross vehicle mass limits on roads they maintain.

“The overall cost of infrastructure and engagement with the private sector on infrastructure financing are key economic challenges faced by Australia and other countries in our region,” the Prime Minister’s office said in a joint statement with Treasurer Joe Hockey and Assistant Minister for Infrastructure and Regional Development Jamie Briggs.

“Australia must ensure that private investment is as attractive as possible by reducing the cost of building infrastructure by driving efficiency and removing red tape.

“This inquiry will be crucial in identifying how we can lower construction costs and develop a partnership with the private sector to build the infrastructure of the 21st century that Australia needs,” the federal minister said.

The federal government has told its expert body to deliver a draft report to it for release by March 2014, just in time for the federal Budget.

However a wildcard in the funding mix remains the threat of a new High Court challenge of direct federal funding for local government projects, including Roads to Recovery, which could be legally jeopardised should previous interlocutors including Ronald Williams be successful in their latest efforts.

Local governments had attempted to guarantee direct federal funding by pushing for a referendum on formal financial recognition of the sub-jurisdiction, but the vote was scrapped after a change of election date conflicted with necessary enabling legislation.

Local government representatives are now expected to put their case on infrastructure funding to the Productivity Commission over the next six months after the terms of reference for the infrastructure inquiry were released this week.

The government has also told the Productivity Commission to “have regard to work already underway by the Commission of Audit.”