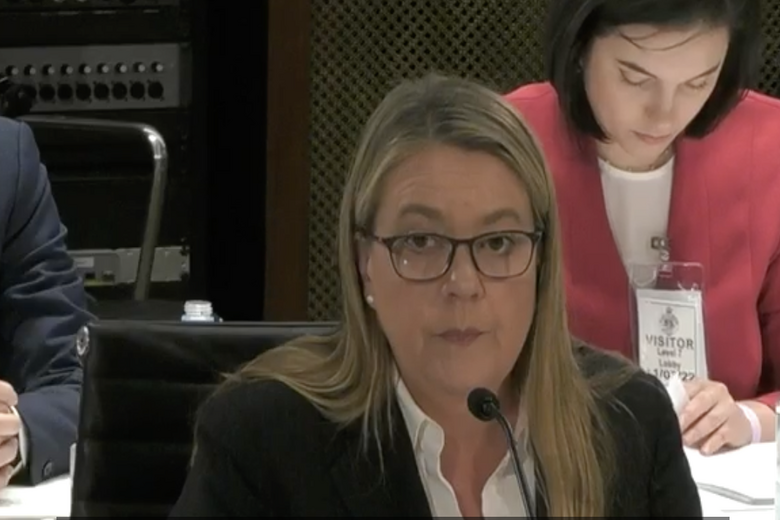 Jenny West told a parliamentary inquiry that her removal from a top trade posting given to John Barilaro was one of the most disappointing episodes of her life.

Senior public servant Jenny West was told she no longer had a plum NY trade post that ended up going to former NSW Deputy Premier John Barilaro because it would be ‘a present for someone else’.

On Monday Ms West gave evidence to an inquiry into the controversial appointment of Mr Barilaro as Senior Trade Commissioner to the Americas, a job previously promised to her and endorsed by the then Premier Gladys Berejiklian.

Ms West said she was told by Investment NSW CEO Amy Brown last August that she had the $500,000 job after an interview by an independent panel.

A month later she learned the job was on hold pending a decision on a Cabinet submission by then trade minister Mr Barilaro to make the appointment a political one, and to give him authority to decide who got the job.

On the same day, Ms West was also told her current position with Investment NSW no longer existed, ruling her out from reapplying for the trade job.

“In the space of four weeks I went from having been appointed to the role of the senior trade and investment commissioner to the Americas, to potentially not having a job,” Ms West told the inquiry.

The Public Accountability Committee, which is holding the inquiry, has agreed to refer Ms West’s opening statement to the ICAC, chair Cate Faehrmann told Government News on Tuesday.

‘A present for someone’

On October 14,  Ms Brown informed Ms West  that the trade job was no longer hers.

“Ms Brown said that the position … will be a present for someone,” Ms West said.

According to a file note by Ms West, Ms Brown told her: “I have spoken to (Trade) Minister Stuart Ayres and he has confirmed you will not be getting the Americas role. It will be a present for someone. There will not be a role in New York for you.”

Mr Barilaro, who resigned from Parliament last October,  was announced as the new trade commissioner in May, but he has removed himself from the position since details of the circumstances surrounding his appointment emerged .

Ms West said she applied for the job, after being encouraged to do so by Ms Brown, on May 12 2021 and appeared before the interview panel on July 21.

She was told her application had been successful on August 12.

“I was told I was the preferred candidate and Amy called me and sent me text to congratulate me,” Ms West said. “She sent me a text message saying ‘congratulations this is one to frame’, and she had an emoji of the Statue of Liberty and a champagne bottle.”

Her contract terms were approved by Ms Brown on August 14 but on September 17 she learned of Cabinet a submission t to change the way the job was appointed.

She sent me a text message saying ‘congratulations this is one to frame’, and she had an emoji of the Statue of Liberty and a champagne bottle.

An email from Ms Brown to Ms West, read out to the committee, said  “given the Deputy Premier has now formally lodged a submission to Cabinet ….I won’t be able to proceed with the finalisation of your contract until I’m aware of the Cabinets’s decision.”

The committee heard that after the submission was approved, Ms Berejiklian said “there was a lot on the agenda for the meeting and sometimes she had to let some items go through”.

On October 21 Ms West was told by the Secretary of Premier and Cabinet Michael Coutts-Trotter that her employment had been terminated without cause.

Her previous request to meet with Mr Coutts-Trotter had been ignored, she said.

Ms West accused Ms Brown of previously giving inaccurate and ‘even false’ evidence to the committee, including that she thought Ms West was unsuitable, that there were ‘discrepancies’ in her CV and that Ms West was absent from work without explanation.

“I am genuinely surprised by the matters raised by Ms brown in her evidence before this inquiry,” Ms West said.

“Many of those things said are inaccurate or even false … much of what Ms Brown has said is simply untrue.”

Ms West described the events as a  “very disappointing episode in my life”.

Ms Faehrmann said the committee had agreed that Ms West’s opening statement should be forwarded to the ICAC “given the serious allegations raised including that the role of Senior Trade and Investment Commissioner was going to be a ‘present for someone’.”