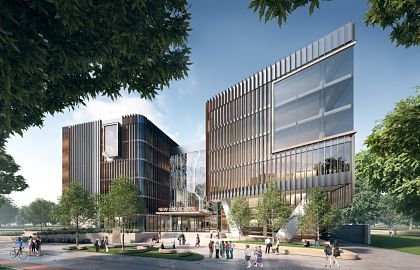 As the idea of high-rise schools in Australian cities gets more popular, the South Australian government has unveiled the design for its first high-rise public high school, which should open its doors by 2019.

The new $100 million Adelaide CBD High School, which will specialise in teaching Science, Technology, Engineering and Maths, will be in Adelaide Parklands and the university precinct and cater for 1250 children in years 8 to 12.

The state government’s plans involve refurbishing the University of South Australia’s seven-storey Reid Building on Frome Road and connecting it to a new six-storey building by a glass atrium. The design also features outdoor landscaped terraces for learning and play.

Project management company Turner & Townsend Thinc is overseeing the Adelaide school and another school in the air in Parramatta, Sydney.

The company is using an innovative procurement model for the Adelaide school, where two contractors provide “early constructability, time and cost advice” during the concept and design phases at a fixed price.

Nathan Hawkes, Associate from Turner & Townsend Thinc, said the procurement model was a hybrid of Competitive Early Contractor Involvement (ECI) and Design and Construct Process, which would deliver best value and certainty of cost and time to the South Australian government.

“The company is pleased to secure its second future focused school project which will set new benchmarks for the education sector in Australia and provide a valuable resource for the community,” Mr Hawkes said. “We will be using our global capability and best practice work principles to deliver one of the most innovative and thought provoking projects that has ever been seen in the country.” 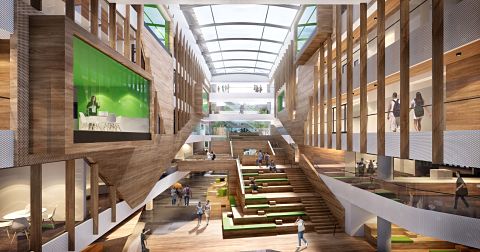 The school joins a number of high-rise vertical schools going up across Australia, benefitting from customised lay-outs, online delivery, flexible classrooms and inventive additions such as rooftop basketball courts and hanging gardens.

The trend for schools to go up, not out, has gained traction in recent years.

Plans are also afoot in Victoria to build a $40 million five-story vertical school in South Melbourne to accommodate 525 children.

It makes good sense, as urban space gets tighter and population increases; whether the aim is to reduce a school’s urban footprint, for example in Sydney and Melbourne, or to cleverly fill up vacant CBD office space, like the first Western Australian vertical school, St George’s Anglican Grammar School in Perth.

The concept can get children learning in the heart of busy urban communities, where they are close to facilities such as museums, galleries and churches and next to buildings they might end up working inside. It can also bring the community closer to school facilities for use after hours, such as libraries, gyms and classrooms.