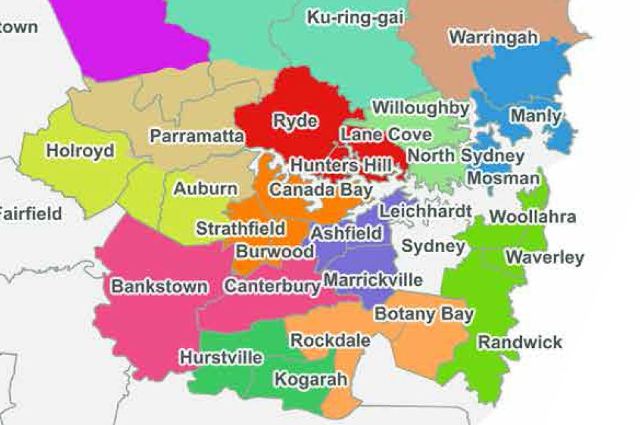 The NSW government has released maps of the state’s proposed council mergers, a plan that could ultimately eliminate local governments.

They come in the form of grainy, low resolution image files embedded into PDF documents, a notable departure from the slick and easily reproduced ‘info graphics’ favoured in other major government announcements.

Some of the most controversial forced council mergers are planned for Sydney’s Metropolitan north: Warringah will be carved in two: one chunk merging with Pittwater and another with Manly and Mosman.

Also on the cards is a merger between Hunters Hill; Hornsby and Ku-ring-gai; Lane Cove and Ryde and another between North Sydney and Willoughby.

The ‘Hands off Holroyd’ campaign will be bitterly disappointed at the government’s plan to merge it with part of Auburn Council, rarely out of the news these days due to its colourful Deputy Mayor, Salim Mehajer. Parramatta City Council will pick up another chunk of Auburn and snatch-up Sydney Olympic Park.

There will be disquiet in the regions as well. The council amalgamation protest rally in November was peppered with marchers from areas such as Dungog and Cabonne.

Dubbo and Wellington look set to merge, as do Orange, Cabonne and Blayney and Shellharbour and Woollongong.

The end result, if Premier Mike Baird gets his way, will be a reduction in Greater Sydney Councils from 43 to 25 and regional councils from 109 to 87.

With today’s (Friday) announcement, Sydney’s metro councils have finally learned what Premier Mike Baird’s definition of ‘scale and capacity’ is: 150,000 people or more.

This figure was not divulged during the Fit for the Future process and many councils failed the test on ‘scale and capacity’ without knowing where the benchmark was set.

“It’s a cruel joke, and unfortunately the joke is on the people of NSW because they are the ones likely to lose any meaningful input on the issues that impact on their day-to-day lives,” said Mr Rhoades.

“LGNSW will continue to hold the Government to account throughout this process, which must be followed to the letter if the Minister wishes to avoid legal challenges.

“But it’s important to note that even though the review process offers an opportunity for community input, the Minister is in no way bound by its findings or recommendations, or that of the Boundaries Commission.

“As long as it has ticked all the procedural boxes as set out in the Act, the Government can essentially proceed to forced amalgamations at will.”

Premier Mike Baird heralded the mergers and said it would improve infrastructure and stabilise rates.

“Importantly, fewer councils will mean a big reduction in red tape for the NSW community and the businesses that work with councils,” Mr Baird said.

New councils will receive up to $10 million towards merger costs and up to $15 million for new community infrastructure.

Local government elections scheduled for September next year will be delayed, probably until March 2017.

The public consultation process will start in January, once detailed proposals are made available at www.councilboundaryreview.nsw.gov.au 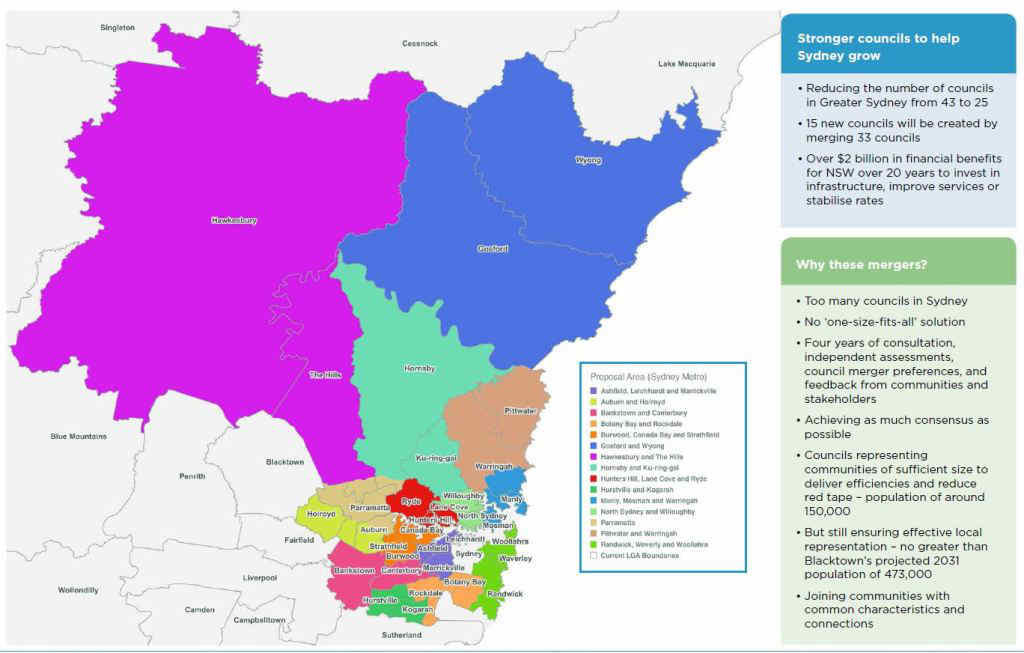 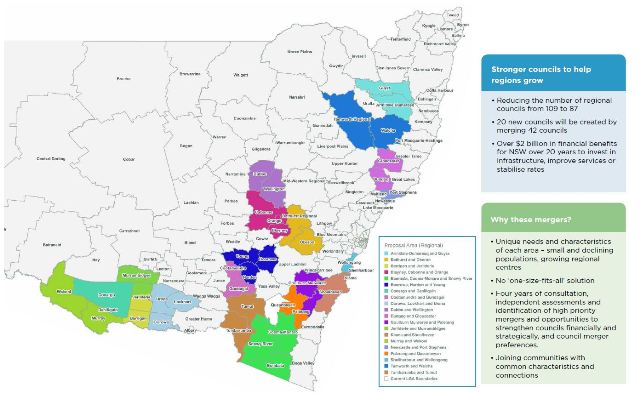