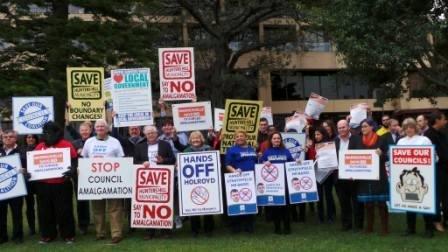 A coalition of councillors, residents, mayors, community groups and businesses owners from parties across the political spectrum- except the Coalition – has put its foot on the accelerator to oppose the NSW government’s mega council reform agenda.

The Save Our Councils Coalition (SOCC) – officially launched last week but the group appears to have been working  away behind the scenes for several months – aims to ramp up the pressure on NSW Premier Mike Baird through social media and public protests in an attempt to highlight the widespread disaffection in council chambers across the state to the idea of forced council amalgamations.

The heat is on, with NSW councils’ Fit for the Future applications due in by June 30, where councils must demonstrate scale and capacity, sustainability and efficiency, and there has been a rash of Facebook groups opposing forced mergers in response including:  Save Randwick from Amalgamation, Save Our Strathfield and Pittwater Forever.

“If they want to amalgamate us they’ve got to take down and bash down the walls. We are not moving.

“The eastern suburb councils are in disarray. There are some mixed and strange mergers being sorted out but we are here to stand alone. We are not going to be amalgamated.”

Greens MP and Local Government Spokesperson David Shoebridge said an overwhelming number of NSW residents were “deeply opposed” to the idea of councils merging and that there was no “rational case to supersize NSW councils.”

“Forced amalgamations are so unpopular, so anti-democratic, that everyone from the Christian Democrats to Labor to the Shooters and the Greens are standing together to oppose them in Parliament,” Mr Shoebridge said.

“Residents want to retain the local character and identity of their neighbourhoods, not see that lost in a one-size-fits-all mega-council.

“Larger councils mean less representation and advocacy, less of a voice on planning proposals, less access to your local government, and poorer services,” he said.

“There’s never been a cogent case for forced amalgamations. If the residents want it, there is provision for them to apply to merge.”

Councils had feared that IPART was going to set a minimum population target of around 250,000 residents as a marker for merging but these fears never exactly materialised. However, IPART has said: “We will be guided by the population estimates for a particular local government area included in the Independent Local Government Review Panel’s recommended options”.

The Independent Pricing and Regulatory Tribunal (IPART), which the NSW government has tasked with assessing the applications, only released the final assessment criteria recently. IPART will hand down its recommendations on whether councils should merge with their neighbours or go it alone by mid-October, a timeframe which the Local Government NSW has strongly criticised.

Further evidence of the rumblings of rebellion amongst ratepayers and councils is the current NSW Upper House inquiry into the way the process has been managed and how the criteria for ‘fit’ councils has been decided. The inquiry is taking submissions until July 5 and is due to report by mid-August. A measure of the level of resentment stirred up by the prospect of forced council mergers is that there will be five public hearings during the inquiry in July and August.

It is unclear whether legislation would be the route taken to push councils who fail the Fit for the Future test and who are unwilling to merge to amalgamate with their neighbours. However, it looks likely since the alternative would be to put every change in front of the Boundaries Commission and spark a spate of public hearings. Of course, the danger faced by Premier Mike Baird in taking the legislative option is the obstinence of balance-of-power holders like Christian Democrats Upper House MP Fred Nile, an opponent of forced council mergers.