The City of Sydney has had its fair share of collisions with the Baird Government over the council’s big push to make cycling a mainstream mode of mass transit to replace cars in the CBD.

But new bike-based enterprises are positively booming in the City, according to Lord Mayor Clover Moore, who’s switched gear from promoting the sustainability and health benefits of riding to selling the hard dollar value of a rapidly growing industry.

As one of the toughest council elections yet looms large (September), the economic uplift from “bike centric businesses” is being wheeled out by the Lord Mayor as proof positive that a switch to pedal power is creating new commercial opportunities rather than curtailing them.

People that ride into the CBD from nearby local government areas don’t vote in City of Sydney elections … but shops that feed of them now do, thanks largely to a push from Moore’s Liberal Party enemies to rope businesses into the vote.

Definitive financial numbers are a little hard to come by, but the Mayoral spin is that replacing four-wheeled gridlock in the CBD with a networked series of dedicated bike lanes is now generating new entrepreneurial investment rather than inhibiting growth.

Cycling used to be a niche market, but these days it’s very big business. Reckoning from  IBISWorld pegs compound annual growth just from bicycle retailing and repairs in Australia at sharpish 7.9 per cent between 2011 and 2016 million and annual revenue at $729.

“The way we travel in Sydney is changing. More than 7,000 people ride to work in the city centre each day – the equivalent of 116 full buses,” Lord Mayor Moore said.

And the different cultural attitudes towards commuter cycling between Sydney and Melbourne – think police crackdowns – are well documented.

Unlike Melbourne and Brisbane and many European cities, Sydney is yet to establish a dedicated bike share/hire scheme that allows riders to just unlock a council bike from a city stand and then leave it at another.

But what is booming in Sydney are more bespoke services catering to regular commuters, hipsters and higher-end corporate cycling types that wouldn’t be seen dead on a tourist treadly.

One of the big questions is whether Sydney’s new cycle paths that are persistently pilloried by radio shock jocks and Moore’s opponents are creating new growth.

One business in the frame for Moore’s vision of velocentric* growth is Pyrmont-based Livelo that rents expensive carbon road bikes to visiting business travellers and the corporate lycra set that want to clock-up some quality miles and are happy to rent a decent machine that’s properly sized for them.

Livelo’s founder founder Peter Barnes told Government News that from his perspective, the city’s new separated bike paths were a “great foundation” and a “really good direction” for infrastructure to be headed.

“The infrastructure is the first step in what I think could be a really great economic outcome for Sydney. Think of the Chinese tourism market, which is significant and growing,” Mr Barnes said.

He wants politicians to see the bigger picture.

Part of the economic opportunity, as Mr Barnes sees it, is that while many of Sydney’s iconic outdoor attractions – like hitting the surf in Bondi – are somewhat limited because ocean swimming is not a cultural staple of nations like China, that’s not the case for cycling.

“So if we had some infrastructure through which [visitors] could ride through the city and the Eastern Suburbs out to Bondi, that’d be a great physical activity for them to participate in … it could become one of those ‘bucket list’ things.”

Like many, Barnes sees Sydney’s emerging bike paths infrastructure as “the first bay steps” to what will ultimately eventuate, not to mention the boost it will provide to commerce and culture.

It also says a lot that Livelo operates in many other Australian capitals including Adelaide, Brisbane, Canberra, Melbourne and Perth. It’s a business that could easily go global too.

There’s a hardcore side to the cycling business that goes way beyond the beard/tatts/fixie café + craft beer set too.

Retail opportunities like bike stores, workshops and cafes are a sure sign of ‘main street’ growth, but the demand for smart solutions and products that cater to a massive sports and fitness market also need to be counted Mr Barnes says.

He cites Australian businesses like Catapult, which specialises in wearable athletic performance monitoring and analysis, as an example of how creating access to infrastructure that promotes physical activity can translate into wider business success.

“In cycling, a number of businesses that have started operating in Sydney are spreading their wings,” Mr Barnes says. There’s a lot of activity.”

But he’s equally adamant that while decent infrastructure is a contributor to the growth in cycling, it’s one of many factors.

“While you couldn’t put your finger on the laneways [cycle paths] and say all of this is growing as a direct result of that, it’s the confidence that the laneways give us [that helps].

That cycling is understood in society now at all different levels and that that it’s a growing thing.

“When you get Cadell Evans winning [the Tour de France], you get the lanes going in, you get the negative pressures of traffic and the cost of parking  … it creates a very strong wind on our back pushing cycling forward.”

Not all bike couriers are psychos. Some deliver flowers.

According to Clover Moore 13 per cent of City of Sydney residents ride a bike “in a typical week” a trend the Lord Mayor anticipates to grow “in line with the City’s anticipated population growth by 60 per cent by 2036.”

At a business level, part of that growth is set to come from an increase in commercial deliveries being made by bike, and not just documents, small parcels and impoverished students delivering takeaway food.

Never one to turn down a bouquet, another of Clover Moore’s real-world business biking successes is start-up (every politician has to have one) Little Flowers that carts around and delivers floral arrangements in a Dutch style delivery bike.

Apart from avoiding registration, fuel and other on road costs one of the biggest advantages to delivering by bike, says Co-founder Sarah Regan, is that they differentiate the business and help it stand out in a crowded market.

“Bike couriers deliver about 70 per cent of our flowers now and they’re a really critical part of our team,” Ms Regan said.

“The bikes act like a mobile billboard; the product and our branding are out on display. People love seeing the couriers laden with flowers and we often get emails and Instagram posts telling us that it’s made someone’s day.”

That’s a nice touch when one of Little Flowers’ unique selling points is that it promotes a different bouquet each day. 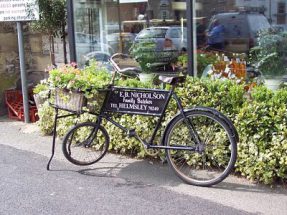 One bike trend the City of Sydney isn’t quite promoting is businesses – usually retailers – kitting out bikes as two-wheeled branded billboards that get chained-up to lamp posts, bike racks or anything else that will attract the attention of passers-by.

It’s certainly an innovative and economical form of outdoor advertising for high foot traffic areas, even if the regulatory aspects are just a little ambiguous at the moment.

Government News contacted the City of Sydney last year to find out whether the ‘locked bike advertising’ was becoming an issue. It clearly wasn’t.

“We have received no complaints regarding signage on bicycles,” said a City spokesperson at the time.

“The City of Sydney and its rangers only remove signs if they are deemed to be dangerous or obstruct a footpath.”

Abandoned bikes also don’t seem to be an issue either at the time, even if there seems to be more of them.

“City rangers monitor and remove abandoned bikes in inner Sydney and surrounding suburbs. Around 2 abandoned bikes are removed each month – this number been consistent over the past few years,” the City spokesperson said last year.