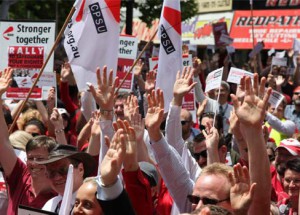 The pay increase on the table is 6 per cent over three years and the vote closes on Thursday February 11.

DHS staff voted in September last year to reject the enterprise agreement, with 83 per cent of staff opposing it. However, the pay offer then was 4.5 per cent over three years.

The 34,000- strong Department initially proposed another vote in December last year but ended up postponing it.

The Community and Public Sector Union (CPSU) claimed at the time that the government had ditched the ballot after realising it would lose in a landslide “no” vote because it had not budged on the terms and conditions.

The union has previously criticised the agreement for being ‘’a dud deal’, saying it attacked workers’ rights to flexible and part-time work arrangements.

A union spokesperson told Government News that there had been some “tinkering around the edges” in the new agreement but its main concerns had still been ignored, particularly those around family friendly conditions and flexible working.
It is understood that no decision has yet been made about industrial action if the enterprise agreement is again rejected by DHS staff.

Meanwhile, employees at the Australian Electoral Commission (AEC) are due to vote on their latest agreement next week. The union is encouraging staff to vote ‘no’ labelling it a “substandard offer.”

CPSU Nadine Flood National Secretary said last year: “It is time to fix this mess,” she said. “Minister Cash needs to do more than pretend agencies and CPSU can negotiate an outcome, when agencies have both hands tied behind their back.”

Commonwealth public servants are going out into the community to talk about the value of public services this weekend, February 6 and February 7, says the union to highlight “how the Turnbull government is undermining public services by going after the jobs, rights and pay of the people who help make our country a great place to live.”

One thought on “Human Services bargaining showdown set for this Friday”