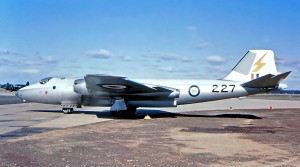 If you’ve ever wanted a free 1950’s vintage Canberra bomber, the Department of Defence could just have the deal for you’ve been waiting half a century for, and just in time for Father’s Day.

After sitting around for decades on bases as heritage scrap, the Directorate of Air Force Heritage has finally opened its bomb bay doors to jettison two of its earliest jets – and an antique propeller Neptune sub-hunter – by issuing an appeal to air history buffs to come collect aircraft designated as “surplus to the requirements of the ‘heritage fleet’.”

The unusual appeal to military aviation enthusiasts has come in the form of a call for expressions of interest “from Australian historical organisations to obtain these aircraft” with ownership of the planes “transferred by deed of gift.”

At the moment the early nuclear age beasts appear to be sitting out the front of bases in Amberley in Queensland and Wagga Wagga in NSW awaiting someone to take them away.

Canberra bombers made up the bulk of the RAAF’s bomb truck fleet when Australia switched over to the jet age, with the aircraft put into active service during the Malayan Emergency and Vietnam war. They were eventually replaced by the revered F-111.

Air Force Heritage is firmly cautioning prospective restorers the aircraft are not in great condition.

“These aircraft are unserviceable, having been used as training aids or as display aircraft for many years. They have been open to the weather and consequently are corroded to varying degrees. None is complete, with many components having been removed for the preservation of other aircraft in the ‘heritage fleet’. Each aircraft contains hazardous materials which must be mitigated in any retrieval,” the offer to take them away says.

And while the planes are free, Air Force Heritage is adamant they need to go to a good home. It stresses that the Expression of Interest it’s called for should be seen as a competitive tender.

“Interested historical organisations submitting an EOI will be asked to detail their plans for the use of the aircraft in their collections or displays. The Royal Australian Air Force (RAAF) is particularly interested in how the historical organisation might use the aircraft to tell the story of Australian military aviation. Any proposed use of these aircraft that could impact adversely on the reputation of the RAAF would not be supported,” the documents say.

Even so, the planes would clearly be a trophy for collectors and the documents say people keen on picking one up will get to have a look at them in situ.

Anyone interested has until 21st September to get their offers in.

One thought on “Defence prepares for Canberra clean out”