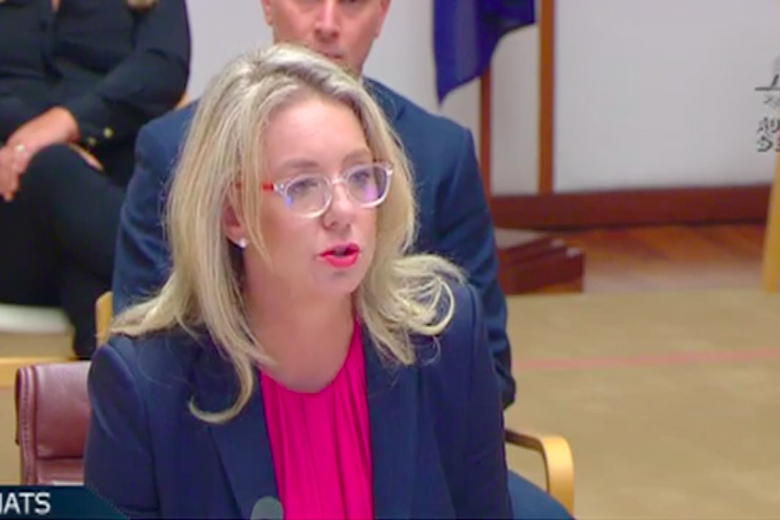 Senator Bridget McKenzie fronted the select committee on the administration of sports grants in February, 2021.

The Senate Select Committee on Administration of Sports Grants is wrapping up hearings after a 2020 audit found evidence of bias in the awarding of $100 million of grants,  sparking allegations of pork barrelling.

Senator McKenzie denied the audit’s findings that grants were skewed towards marginal and targeted seats and said she was proud of the program, although she admitted there could have been more transparency and better record keeping.

“I’m proud of the program,” she told the committee on Friday. “By all metrics its was …highly successful.”

Senator McKenzie, who quit cabinet last year in relation to a grant awarded to a gun club of which she was a member, said she wanted to correct misconceptions about the program including the “persistent false narrative” that it was politicised.

“I completely reject that the exercise of my ministerial discretion resulted in the negative politicisation of the program,” she said.

“All projects that received funding were eligible to receive it.”

Senator McKenzie said she “unequivocally rejected” that marginal or targeted electorates were used by her office as a basis for decision making.

She told the committee she never saw a memo from within her office linking applications to electorates, and identifying marginal and targeted seats.

“The memo wasn’t provided to me or ever seen by me,” she said.

The former minister also denied knowing anything about changes to a list of approved grants that were made after she signed off on it, and denied backdating the brief.

The brief, relating to a third round of grants and approving 228 projects, included nine new and amended projects.

Senator McKenzie told the committee she didn’t know who changed the document but said the changes were made by her office and not the office of the prime minister.

She said the first she heard about the changes during Senate estimates in March and denied “taking the fall” for the PM.

Senator McKenzie said she accepted there was confusion about colour-coded grant application spreadsheets which identified targeted or marginal seats and were sent to the prime minister’s office.

She said she never saw a colour-coded spreadsheet prepared by an adviser and sent to the PM’s office the night before she had a scheduled meeting with him.

“So you’re telling us an adviser in your office… took the time to identify hundreds of projects including in marginal and targeted electorates … sent multiple lists to the prime minister’s office and you knew nothing about it?” The Committee’s Deputy Chair, Greens MP Janet Rice said.

“Are you incompetent? You had no idea your staff was preparing information that was basically going to be critical to be rorting the scheme of hundreds of millions of dollars?”

The question attracted an angry response from Senator McKenzie who demanded it be withdrawn.

An application round for the sports grants was run in 2018 with 2,056 applications for funding worth $400 million.

The then sports minister awarded 684 grants totalling $100 million in three rounds between December 2018 and April 2019, a month before the federal election.

Sport Australia, which was administering the scheme, had a funding cut off score of 74/100, while the minister’s office did a parallel assessment using other criteria.

Sixty-one per cent of grants went to applications below this funding and the audit found other evidence that marginal and targeted seats were favoured in terms of both the amount of funding allocated and the number of projects funded.

“The decision clearly impacted on our local community, the shire’s work program and, to an extent, staff morale.”

Local government projects were among those that missed out. They included:

South Australia’s second largest council, City of Salisbury, applied for $500,000 to complete the Bridgestone Athletics Centre, described by CEO John Harry as one of the most significant new sporting facilities in the state and one that has been identified as critically needed since 2005. The project was ranked 90 by Sport Australia. Council is now being forced to fully fund the $6 million project.

Inner Melbourne Glen Eira City Council applied for $213,675, to be matched one-for-one by Council, for a lighting upgrade at Caulfield Park, Council’s largest and our most popular open space for active recreation and the home of seven sporting ovals and several tenants, including soccer, lacrosse and cricket clubs. The project scored 83.

Nillumbik Shire Council north east of Melbourne, working with a local hockey club, applied for $500,000 to redevelop club rooms at Greensborough. “While club members were disappointed to be told the funding application had been unsuccessful, it was more disappointing to find out through the media it had received a merit score of 89 – well above the cut-off – and ranked us 10th on the list of projects that were unsuccessful,” Manager of Recreation and Leisure Heath Gillett told the committee last year.

Manjimup, the largest shire in the South West region of WA submitted for $500,000 to transform a sporting precinct with improvements to oval lighting and drainage, amenity upgrades, accessibility upgrades, increased parking, increased spectator seating, and security improvements. The application was 10 points over the threshold used to recommend funding. CEO Andrew Campbell said the application had taken up a large amount of financial and human resources and “the decision clearly impacted on our local community, the shire’s work program and, to an extent, staff morale”.

City of Bayswater in Perth had applied to resurface cracks and failing netball courts in Noranda, which were also used for junior tennis coaching.

“The city is satisfied that the application met the criteria and would have been eligible for funding,” Manager of Project Services Jon Vines told the committee. “We felt we had a strong application on behalf of the community, and now the project is to be fully funded by the ratepayers”.

Also unsuccessful were two councils from remote areas, including East Arnhem Regional, which had applied for oval lighting and improvements to a sports area a Umbakumba, and an application $500,000 for a community gymnasium by Woorabinda Aboriginal Shire Council. “It wasn’t just sport; it was also providing space for women’s events,” Woorabinda CEO Michael Hayward said. “A facility like this would have helped support programs that would engage women, and engaging youth to get physically active and have something to do after school.”

The Committee is due to report on March 18.