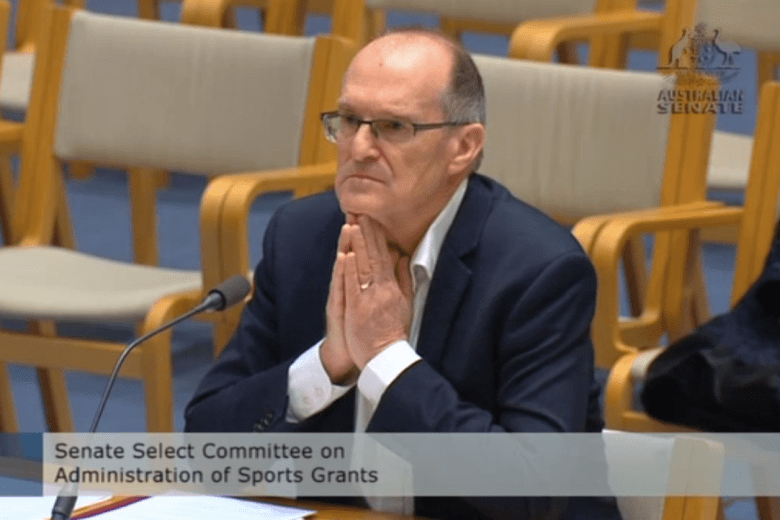 Secretary of the Department of Prime Minister and Cabinet Phil Gaetjens has been grilled over his investigation of community sports funding in targeted electorates.

The head of PMC has defended his investigation of the then sports minister’s role in a community grants scandal during a grilling before a senate committee.

Phil Gaetjens was asked to investigate whether Bridget McKenzie had breached ministerial standards after a report by the ANAO in January found the $100 million Community Sport Infrastructure Grants Program had favoured projects in ‘marginal’ and ‘targeted’ seats.

Mr Gaetjens’ report, which has not been released, controversially found Senator McKenzie had not breached ministerial guidelines in relation to the fairness of the grants.

He told the committee on Wednesday he advised Prime Minister Scott Morrison that while there were “some significant shortcomings in the minister’s decision making”,  Senator McKenzie had acted within her remit.

Mr Gaetjens later acknowledged he looked at the number of projects funded rather than the amount of funding received.

“While I acknowledge the shortcomings  of the administration of the program, Senator McKenzie did not in my opinion breach the standards in respect to fairness,” he said.

He denied his loyalty to the prime minister was the reason why Mr Morrison’s role in the distribution of the grants wasn’t investigated.

“I’ve got no evidence to say that there was a role,” he said.

Mr Gaetjens admitted he did not interview the prime minister and had not seen 136 emails between the PM’s office and that of Senator McKenzie, or 28 spreadsheets allocating funding to marginal seats before finalising his report.

Mr Gaetjens told the committee his task was to audit possible ministerial breaches, not processes around administration of the program.

“I would have thought the process, including communication between the prime minister’s office and the minister for sport’s office, was pretty central to you forming a view about whether there had been misconduct,” Senator Gallagher said.

Mr Gaetjens also admitted he was unaware that decisions on the program were still being made after the government went into caretaker mode before the election.

“Does it bother you that $40 million of taxpayer funds were being signed off after caretaker kicked in, going for projects in seats that government was trying to win?” Senator Gallagher asked.

“I’d have to look in more detail at the actual decisions that were made,” Mr Gaetjens said.

His reply prompted her to say: “Oh come on Mr Gaetjens. You’re the head of the public service. It doesn’t bother you that tax payer funds are being spent after caretaker kicks in? Extraordinary.”

Mr Gaetjens also said that only Senator McKenzie and the CEO of Sport Australia were interviewed before the report was handed down.

Ms Gallagher accused the investigation of “conveniently” ignoring  the process involved in the allocation of funding, which according to the audit office saw nine per cent more funding for Coalition-held marginal seats and 41 per cent more for target seats.

Mr Gaetjens said he looked at the number of projects funded rather than the volume of funding and “the data shows you what the outcome was.”

“The remit of my enquiry was to look at the minister and did she breach the standards. So I will not take it that the analysis was partial or limited,” Mr Gaetjens said.

“I will not stand by here and just be criticised for saying it’s a limited process.”