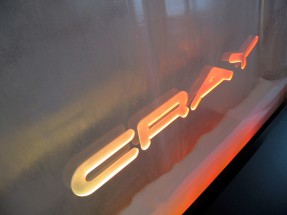 When it comes to computing cults obsessed with raw power, few technology companies come close to Cray and now the firm finally has something to crow about down under.

The thirty-something manufacturer of some of the fastest off-the-shelf hardware on the planet has just snatched-back its crown as the supercomputer providore to the Australian Bureau of Meteorology thanks to a $77 million (US$59 million) deal just in time to save the nation’s weather people from forecasting obsolescence.

It’s been a long time between drinks for Australia’s meteorological forecasters and the iconic firm which last sold one of its big boxes – a 1 gigaflop Cray Y-MP – to the BoM in 1992 after it initially sold its first machine the Bureau in 1988.

The company also had some success at the Department of Defence, where the former Defence Signals Directorate parked a similar machine in its foyer for some years as eye candy for visitors, some of whom occasionally mistook the beast for some sort of couch thanks to its revolutionary semi-circular design.

These days Crays look more like an industrial fridge or power plant but they’ve still managed to put themselves ahead of the massive shift to cloud computing that can draw on vast pools of computing power remotely to boil down numbers or spin up code.

A key reason they remain at the frontline of computing is that core clients like weather bureaux don’t just need utility grunt, they require constant, fast and visual modelling on a scale so big that the latency of cloud becomes problematic.

While computation intensive agencies like the Australian Taxation Office, the Australian Bureau of Statistics and Defence all crunch through giant loads at peak times, the demand for weather data, forecasts and modelling is largely constant.

After a longer than expected run-up to buying a new supercomputer for BoM Federal Environment Minister Greg Hunt and his Parliamentary Secretary Bob Baldwin are now eagerly selling the new investment, saying that it will give the national weather forecaster a sixteen fold boost in speed running computationally heavy weather models at 1660 Teraflops.

The buy is also certain to bring relief to government agencies ranging from Defence to state emergency services and local councils which have become increasingly more reliant on greater time accuracy and location specific forecasts and weather analysis to mitigate the effects of phenomena like tropical cyclones and floods as well as droughts and El Nino.

“This will enable the Bureau to issue forecasts and warnings more often and with greater certainty and precision than ever before, giving the community and emergency services unprecedented information, particularly prior to and during severe and extreme weather,” Mr Hunt said.

“Every summer we see how vital Bureau services are in warning of weather associated with bushfires, thunderstorms, tropical cyclones, flooding, rain, and dangerous winds. Our nation is always going to be vulnerable to these events and the Bureau gives us the information we need to plan and act.”

Peter Ungaro, president and CEO of Cray said that the “amazing” amount of data and science embedded in weather and climate models was an example of “how data-driven our world is becoming today.”

“Our vision and experience in helping customers leverage the increased complexity of data-intensive, production-quality supercomputers is a huge part of why the world’s leading operational weather and climate centers continue to turn to Cray. We are excited to be back in the Bureau, and we look forward to a long partnership,” Mr Ungaro said.