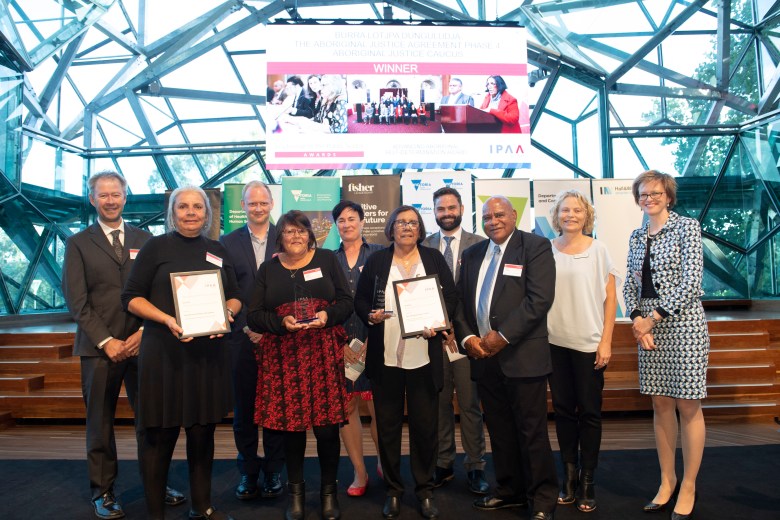 Victoria’s Department of Premier and Cabinet and the Aboriginal Justice Caucus have been recognised for advancing Aboriginal self- determination at the IPAA awards.

A bid to put one of the world’s oldest aquaculture ventures, established by traditional owners more than 6,000 years ago, on the World Heritage list has won a public administration award.

Victoria’s Department of Premier and Cabinet was recognised for Advancing Aboriginal Self- Determination for its Budj Bim World Heritage Nomination Project at the IPAA Victoria awards on Tuesday.

If added to the World Heritage List Budj Bim will be Australia’s 20th World Heritage site and the first to be nominated purely for its Aboriginal cultural value.

Budj Bim, near Lake Condah in Victoria’s south-west, is home to the traditional Gundijtmara owners, who originally developed the aquaculture system on the remains of a lava flow.

They continue to manage it today to ensure a sustainable supply of eels.

Last March the World Heritage Centre in Paris announced the site had been accepted for assessment for listing as a world heritage site after an application put together by Aboriginal Victoria in partnership with the traditional owners.

Working in partnership with traditional owners

Josh Smith, executive of Aboriginal Victoria, which sits within DPC, said the award was a huge morale-booster for everyone involved.

It was also a recognition of the work of the Gundijtmara people, who have long been advocating for the site to be recognised and who will travel to Azerbaijan with representatives from Aboriginal Victoria in June for the official UN Heritage decision.

He said Aboriginal Victoria worked closely with the Gundijtmara people to put together a dossier as required by UNESCO, adding the biggest challenge was navigating three levels of bureaucracy with a triple whammy of state, local and UN red tape to deal with.

The bid is currently being assessed by World Heritage bodies and a recommendation will be made to the World Heritage Committee later this year when it is expected to get the green light for listing.

The Institute of Public Administration Australia Leadership in the Public Sector Awards recognise innovative and inspiring public programs, initiatives and services and the people behind them.

There were eight categories and 90 nominations in this years awards, which were updated  to recognise regulation, governance, public sector employers and initiatives that advance Aboriginal self-determination.

David Ali, CEO of IPAA Victoria, said the awards were an opportunity to recognise the people and teams who continued to build the capacity and reputation of the public sector.

“Each year at the Leadership in the Public Sector Awards, we see examples of exemplary innovation and leadership, with projects that continue to push the envelope,” he said in a statement.

Winners at the IPAA Victoria Awards

Department of Premier and Cabinet for Deadly Questions.

Department of Education and Training for Education State Board.