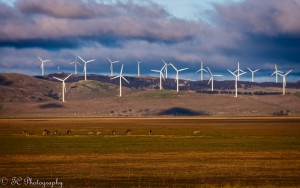 Australia’s first ever National Wind Farm Commissioner, Andrew Dyer, might well fear his recently created role doesn’t enjoy the exceptional Prime Ministerial support it once had – and possibly the next Budget.

But the man paid $205,000 a year and employed part time to investigate complaints into the propeller driven renewables industry has a bigger problem.

Almost nobody can find his website, including Google. But he’s an optimist.

Charged with leading “efforts to promote information availability, providing a central, trusted source for dissemination of information” about the rotating machines so loathed by former Treasurer Joe Hockey, Dyer this week publicly confessed his Commission’s online presence is so invisible he’s forced to email complainants the website address – after they call a 1800 number.

“I have emailed, probably, over 150 people, including community groups, concerned residents and stakeholders. It is not an elegant way of getting it done, but it is certainly a better way to get the message out,” Dyer told a Senate Estimates hearing.

It wouldn’t be so much of a problem if the main lodgement facility for complaints about those noisy windmills that make electricity was somewhere other than a main web page in stealth mode.

And it would be unfortunate if people found it harder than otherwise necessary to complain.

“How is this promotion of information availability happening since your appointment in October, now some five or six months ago, when there is no website and I cannot see how I can find any information?” queried Labor Senator Lisa Singh.

It’s just kind of buried within the Environment Department’s website, so it doesn’t appear on Google until … well Government News went through 16 Google pages looking for National Wind Farm Commissioner and still couldn’t see it.

Still, it’s only been up a couple of months. Give it time to catch on. It’ll be viral.

“I would describe that as an interim website to get basic information out to the community,” Mr Dyer told the Estimates Committee. “We will need a robust version to be built once we can get resources in place.”

Those in the know about wind farms clearly don’t need Google to find the National Wind Farm Commission. They have other antennae.

“I can assure you people are finding us,” Mr Dyer said. “The Google search for the website is a matter that we will have to deal with on a technical basis.”

Cynical and unkind wind power sceptics might smell a conspiracy in the apparent search engine cloaking of the windmill inquisitor general. They can rest assured there isn’t one.

The Estimates hearing heard that the real root cause of the National Wind Farm Commission’s internet oblivion is its dogged pursuit of an independent website outside the loving confines of the Department of Environment.

“I am in a process — which the secretary is aware of — of getting an independent URL. That will be nwfc.gov.au, so it is far more accessible and hopefully more easily found on Google. But there is a process that I have had to work through to get that to happen,” Mr Dyer said.

Enter those wretched party poopers from the Digital Transformation Office. Apparently it’s all their fault.

“We have been wanting to set up an independent website with its own URL,” said Dr Rhondda Dickson, Environment’s Deputy Secretary, Climate Change and Renewables Innovation Group, throwing Mr Dyer a lifeline. Or overboard.

“There is a process through the Digital Transformation Office that we need to go through to get permission to set up separate URLs.”

Talk about red tape. Of course apologists would argue someone’s trying to stop people setting up random, confusing semi-functional government websites everywhere and create a cohesive, evidence driven structure based on what people actually say they need to find.

Dr Dickson said that in order to get the National Wind Farm Commission’s site up and running “as an interim measure we set it up on Environment’s website.”

“We have done that for the Wind Farm Commissioner to get some preliminary information out, but clearly we are aiming to get to the independent site. I think we now have approval to go ahead on that.”

Mr Dyer said: “It is progressing.”

Senator Singh was particularly keen on dates and deadlines as to when the National Wind Farm Commission’s unshackled website might appear. Opposition Deputy Whip, Senator Anne Urquhart is after a list of those emailed information.

Time for Dr Gordon de Brouwer, Secretary of the Department of Environment, to step and politely manage expectations.

“It is very hard to provide a date of when we would get authorisation for approval,” Dr de Brouwer said. “We will follow up and expedite it as much as possible, and as soon as we find out, if it is satisfactory, we will inform the committee.”

But who’s counting the days before Budget.

And the Wind Farm Commission website that can’t be found? It’s here.

One thought on “Why nobody can find the National Wind Farm Commission website: including Google”