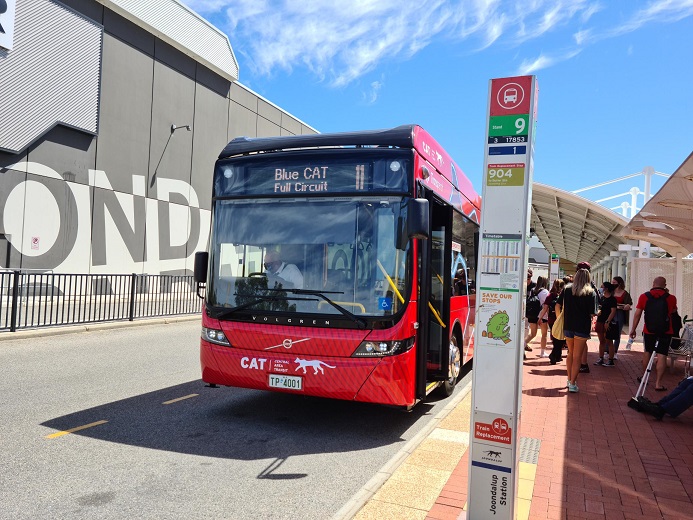 The new CAT bus will be the first of four electric vehicles to be rolled out as part of a trial.

Western Australia is moving towards electric buses, with its first battery-electric bus hitting the streets.

From this week the red bus will service the Joondalup area as part of the northern Perth suburb’s Central Area Transit (CAT) route.

It is powered by lithium-ion batteries with minimal greenhouse gas emissions and is the first of four electric vehicles to be rolled out onto the Joondalup route, as part of a trial.

The four electric buses are being delivered under the Public Transport Authority’s existing bus supply contract with Volvo and will be operated by Australian-based public transport operator Transit Systems.

“Internally, they look similar to other Transperth buses on the network but with one significant difference,” she said in a statement.

“Their battery-electric technology makes them cleaner and greener, with minimal greenhouse gas emissions.”

As part of the rollout, modifications have been made to the Joondalup bus depot, including installation of a high-voltage electric vehicle charging system.

This charging system will allow the electric buses to be recharged at the depot through a combination of the existing grid network and a 100-kilowatt solar power array connected to a large on-site battery storage system.

“Electrifying the way we travel is going to play a significant role in our state reducing emissions and reaching net-zero by 2050.”

The new technology for the electric buses will be evaluated on a range of factors, including safety, reliability, efficiency, performance, downtime and emissions reductions.

Climate Action Minister Reece Whitby said it was a step towards the state reaching its net-zero emission goals.

“We know electrifying the way we travel is going to play a significant role in our state reducing emissions and reaching net-zero by 2050,” he said in a statement.

Last month, the Western Australian government also announced a new partnership that will see up to 50 zero-emission aircrafts in the sky.

The partnership between Western Australian aircraft companies Aviair and HeliSpirit and global aircraft company Eve Air Mobility will bring the new electric vertical take-off and landing (eVTOL) aircraft to the state within the next four years.

The aircrafts are designed with overhead distributed rotors and rear propellers, which enable them to land and take-off vertically.

The four-person passenger aircrafts will only require a helipad for departures and landings, allowing aircraft to be used for both short intra-city air transfers and tourism flights.

They have a low noise footprint and will be suited to operate in both sensitive natural settings and urban environments.

“Western Australia has some of the most beautiful and remote locations in the world, particularly in the Kimberley,” he said in a statement.

“It is great to see local companies looking to the future and the McGowan Government will continue to support local businesses that think outside the box and look at innovative technologies that benefit WA.”