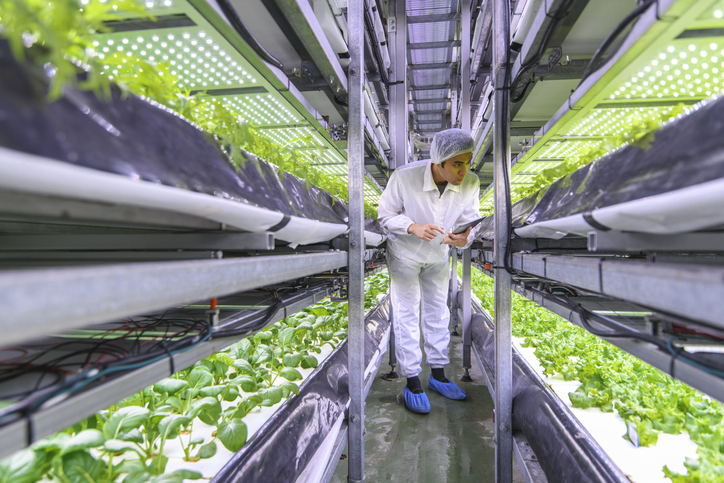 Indoor vertical farming is a more efficient way of growing crops because it is a controlled environment, proponents say.

Vertical farms can boost community engagement while making good use of vacant urban spaces, the founder of a vertical farming start up says.

InvertiGro founder and CEO Ben Lee will showcase vertical farming, which makes use of urban space to grow food, at the City of Sydney’s Emergent 2050 expo next month.

Mr Lee says the functional nature of vertical farms distinguishes them from vertical gardens, which are more ornamental.

He says vertical farming is good for community engagement and sustainable food production and has particular benefits for children in urban areas.

“Lots of children around the world don’t have access to outdoor natural spaces,” he told Government News. “So these indoor farms or vertical farms have been quite beneficial in being able to help with their development.”

Vertical farms can fill up spaces such as disused warehouses and car parks, which Mr Lee predicts will become increasingly available.

“The thought process behind that is, as autonomous cars become more prevalent in the future, car parks will become more and more disused because… you can’t really convert underground spaces into living quarters, and there’s a saturation of retail that you can have,” he says.

Benefits of farming in a controlled environment

Indoor vertical farming is currently seen as futuristic technology where food is grown in a “lab environment”, and this can often be a barrier to communities embracing it,  Mr Lee says.

But he says these fears are unfounded.

“It’s not any different from being grown in the field,” he says. “In fact, it’s much better, it’s much more efficient, it’s cleaner.”

The conditions of indoor farms often prove more favourable than crops grown in the field.

“The reality is that with the shifting weather patterns, being able to grow efficiently in a controlled environment is actually better because you can control the amount of output there by reducing waste,” he says.

“And in a controlled environment, you’re growing product that is cleaner and safer to eat without the risk of microbial contamination, which has happened in some instances in field grown products.”

“It’s already starting to be seen as more commonplace, especially in the US and Europe, where larger corporations or businesses are adopting these as part of their strategy for food production, and also to reduce their carbon footprint through the distribution chain,” he says.

“And with more and more of these business coming to the fore, and more focus on it, it’s already becoming part of the landscape rather than being totally futuristic.”

When clients approach InvertiGro about starting a vertical farm, Mr Lee and his team engage with them to find the right sites to use, plan what the farm will look like, consider capacity and costs required, and then mobilise the resources to implement the project.

He says InvertiGro is currently exploring opportunities to work with the City of Sydney to determine potential spaces for vertical farming.

She said  increasing urbanisation, which 80 per cent of the world’s population expected to live in urban areas by 2050, would lead to an increased demand for food, pressure on water supplies and stresses on transport systems.

“Vertical farming potentially offers a significant opportunity to address these issues,” she said.

Going beyond leafy greens and herbs

“Outside of the leafy greens and herbs, we are able to use the same infrastructure to grow things like fibre for the material industry,” he says.

“And there’s a whole range of other applications, from medicinal plants to viticulture, which we’re very excited about.”

The 2050 Emergent expo on October 19 is a headline event of the Spark Festival and will showcase emerging technologies, initiatives and ideas shaping the future of Sydney.

It will feature more than 30 startups and 50 displays as well as presentations on green cities, alternative housing models and the sharing economy.

“This event is a unique opportunity to learn more about emerging ideas and technologies, connect with their creators and give everyone a say in the Sydney they’d like to see in 2050,” Lord Mayor Clover Moore said in a statement.