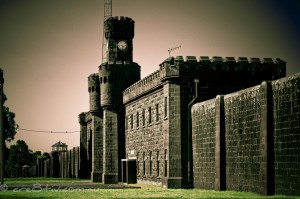 From July 1 the standard visitor pat-down search in Victoria’s prisons will also include hunting for cigarettes, rolling tobacco, lighters, pipes, e-cigarettes and matches.

All of these items will be considered contraband when the smoking ban for both prisoners and staff kicks in at Victoria’s prisons next month. NSW prisons instigate the indoors and outdoors smoking ban in August.

Visitors will be allowed to leave ‘contraband’ in their car or locker but they cannot bring it into jail or leave part-way through visiting a prisoner for a cigarette break and then re-enter, partly because smoking will also be banned in car parks and on land adjoining jails too.

Smoking bans are already in force in Northern Territory jails – the first prison Australian prisons to go smoke free in July 2013 – and Queensland, which kicked the habit in May 2014.

It’s a big deal, especially considering around 80 per cent of prisoners smoke, perhaps unsurprising given the higher smoking rates of groups overrepresented in the jail system: people with mental health problems, indigenous people and drug users.

The changes have received a mixed reception so far from prisoner officers and prisoner advocates across Australia, with some warning of riots and tobacco black markets and others welcoming the ban.

Carl Marsich, Occupational Health and Safety Officer at the Community and Public Services Union said Victoria’s prison staff had been given a long lead-in time of 18 months to prepare for the changes. During this, staff and prisoners were given access to nicotine patches and QUIT programs.

He said the riots which proceeded the 2013 smoking ban in Queensland’s prisons were partly due to the short lead-in time of a few months that people were given to adapt to the changes.

“They’ve [Corrections Victoria] done all the right things in regards to trying to put together a programmed approach and provide awareness campaigns for people coming into prisons. The level of support has been much greater than in some of the other states,” Mr Marsich said.

“We haven’t had no communication to date about any difficulties from our members leading up to it [the ban] but I supposed as we get closer to the date there could be a few problems. Obviously, they’re going to go cold turkey by July 1.

“Some people will obviously find it difficult to adjust and we’ve been trying to provide maximum support for staff and prisoners that they need to adapt to the new environment,” he said.

Officers were most concerned, he said, about the impact of the ban on prisoners serving time in maximum security facilities, such as Port Phillip, Melbourne Remand Centre and Dame Phyllis Frost Centre (a women’s prison) and prison officers would be monitoring these prisons closely.

Mr Marsich said Corrections Victoria had been limiting the amount of tobacco that could be purchased in prisons for the past few months, aware that some prisoners were stockpiling in preparation for the ban.

Asked what punishment prison officers had been told could be meted out to repeat offenders amongst the prison population Mr Marsich agreed that this could include longer prison sentences or transfers to tougher prisons but the loss of entitlements or other privileges would be far more common.
Over in NSW, with two months left to go until the tobacco ban, prison officers appear less relaxed.

Chairman of the Prison Officers Vocational Branch Steve McMahon said that even NSW  prisoner officers that supported the ban thought it should be delayed until problems of overcrowding in NSW jails had eased.

“It’s a recipe for disaster. We have some major concerns about whether, at a time when the prison population is growing beyond the ability to house the inmates and we’re jamming them into the jails, we are going to introduce another change to the lifestyle of people. Our members are very, very concerned about it on that basis alone,” Mr McMahon said.

“It’s been reasonably well though through by the Department. They have learned from mistakes made at other jurisdictions but none of those had our massive growth in [prison] population.”

He said quite a few NSW officers smoked too and they weren’t looking forward to the ban either.

“It’s really hasn’t made a lot of people happy. We have a fairly high percentage of smokers within our workforce and I think they’re not that satisfied that they’re going to have something enforced on them that they don’t particularly agree with,” Mr McMahon said.

The fear of a backlash by inmates is one that is backed up in a January 2015 report by the NSW Inspector of Custodial Services JR Paget, “Full House: The Growth of the Inmate Population in NSW”.

The report found “significant overcrowding” in NSW jails and that NSW inmates spent more time in their cells – up to 16 hours a day – than inmates in any other state or territory.

“Inmates and staff in NSW correctional centres are under significant stress, and prudent policy makers would recognise that even small additional pressures can make the difference between conditions that are uncomfortable and those that are intolerable. This will need to be acknowledged when smoking in correctional centres is banned from August 2015,” the report said.

“Where the state treats inmates in a way that denies them a modicum of dignity and humanity it should not be surprised if they respond accordingly, with individual acts of non-compliant behaviour escalating into collective disorder, such as riots.

“Increasing the punitive nature of the custodial experience was a deliberate feature of correctional policy in NSW in 1989, and it resulted in entirely predictable prison disturbances. But many have now forgotten what a prison riot looks like, or understand its costs and consequences.”

Brett Collins from prisoner advocacy group Justice Action (JA) is a vocal critic of the tobacco clampdown, which he feels will cause widespread distress.

“It’s going to have a devastating effect. It’s the one thing that prisoners have which is central to the culture and their enjoyment and under their control. Removing it is like torture. It can only raise tension inside the prisons in NSW and they’re already a tinderbox,” Mr Collins said.

Mr Collins said JA had tried to secure some concessions from NSW Corrections to ease the ban’s impact and give prisoners a positive trade off, rather than viewing it as a punishment, but the requests had fallen on deaf ears.

Suggestions included more opportunities for education and computers, more time to exercise in the yard or the gym to give prisoners some distractions or providing fresh food to cook with. Mr Collins said prisoners lived on “aeroplane meals” and had little access to fresh vegetables or fruit.

“People are bored. They’re sitting in a cell for 18 hours a day nothing to do, no Internet, no education, sitting there watching TV with two or three other people. We should never forget that people actually live in a prison, that’s their home and their private space and they’re entitled to have that.”

Mr Collins said that during a recent meeting with Corrective Services Assistant Commissioner Luke Grant he was told the ban was not about improving prisoner health but occupational health and safety to provide a smoke-free workplace for prison staff and because some prisoners had complained about their cell mates smoking.

He added that research showed prisoners took up smoking again as soon as they were back outside, he said.

“As soon as they are released, the first thing they do it to have a cigarette,” he said.

He said better ideas would be to allow smoking in designated outdoor areas or have evacuation booths, which sucked the smoke in; put fans in cells; put smokers in together or ban prisoners from smoking between certain hours so officers weren’t affected when they opened cell doors.

Worryingly, there have been reports from prisons such as Risdon Prison in Tasmania, which introduced the tobacco ban in April this year, that prisoners are drying and mixing tea leaves and nicotine patches to smoke and microwaving foil from complimentary hotel jams and toilet paper (to make a wick) to light the homemade “cigarettes” with.

Mr Collins said in the US, where smoking is banned in prisons, a tobacco black market had developed and he predicted a similar thing in NSW.

“The tobacco black market [there] is more important than heroine. We are creating a black market that will cause trauma and tension for prisoners. Prison officers might also be tempted to bring tobacco in.”

A Corrective NSW spokesperson said the ban was introduced because it was a legal requirement from WorkCover that smoking stop completely in NSW correctional centres and complexes and that it would also have health benefits for staff, inmates and visitors.

Preparations for the ban included visits to NSW by prison staff from Queensland, the Northern Territory, and New Zealand who led the cessation of smoking in those places.

“They have generously shared their experiences with us, and the implementation plan in NSW is based closely on the methods that have been tried and tested in those other places,” the spokesperson said.

They also included planning extra activities for inmates, establishing a committee to implement the new policy, supporting staff and inmates to quit and liaising with visitors, inmates and staff to keep everybody informed.

“Smoking has already been stopped successfully in jurisdictions such as Queensland and New Zealand. The keys for success are good communication and strong support for inmates and staff who give up smoking. Both of these are now occurring in NSW, and will continue to be central to our Smoke Free project.”

She said a range of activities were already in place to ensure that staff and prisoners were well prepared and staff in several prisons have received extra training in helping prisoners with mental health issues with quitting.

“Prison staff who don’t smoke have been encouraged to make themselves familiar with material from Quit Victoria on how to understand and assist with the symptoms of nicotine withdrawal,” Ms Shuard said.

In order to prevent prisoners attempting to smoke nicotine patches prisoners will have to return used patches before they can receive new ones.

“Staff are aware of the potential issues associated with nicotine patches and will be carefully monitoring prisoners’ use of them. The removal of lighters and matches from prisons is also expected to make smoking more difficult.”

Asked about the penalties for disobeying the ban, Ms Shuard said staff found smoking or with contraband would face disciplinary action.

“A prisoner who is charged and found guilty of a breach of the smoking policy will be subject to a range of sanctions including: a reprimand, a fine or withdrawal of one or more privileges for up to 14 days.

“If visitors are caught trying to smuggle in these items, they will be treated as if they were trying to introduce any other contraband. They can for example, be refused entry to the prison or only able to have a non-contact visit.”