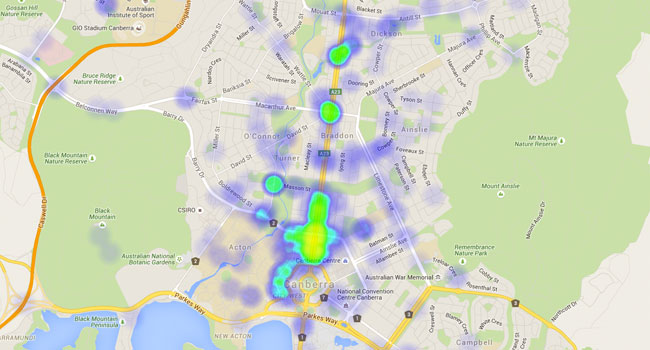 The most dangerous locations for Canberran cyclists have been revealed in a new, publicly available, heat map.

The ACT government has mapped the hot spots for crashes involving cyclists using data reported to police since 2012. It is possible to drill down into the data charting 729 different crashes – including two fatalities – to tables which show the location, time, severity and type of crash.

Various intersections along Marcus Clarke Street, Northbourne Avenue, Barry Drive and Cooyong Street emerge as a notorious hot spots and accidents were most common at intersections, from motorists side-swiping cyclists and due to collisions with parked cars.

The peak time for cyclist to come a cropper is between 8am and 9am with another, predictable, peak between 5pm and 6pm.

“This data will allow the Government to identify roads and paths that may need improvements, to make riding in Canberra safer,” Mr Rattenbury said.

“The data also gives the public access to data, allowing them to make suggestions for improvements and interact with government. The data will allow the public to assess potential risks on their route and identify areas where they may take particular care or look out for a particular risk,” he said.

But Mr Rattenbury maintained that this was not about getting cyclists to change where they cycled or take sole responsibility for safety.

“Under the Government’s ‘Vision Zero’ approach to road safety, we need to focus on creating safer environments for people cycling, and car drivers also have a responsibility to take care for more vulnerable road users. Nevertheless, it is useful for people to see and use data about accident hotspots and risks on their routes.”

“It’s really is now, what does the government do with that data? That’ s the big question,” Mr Armstrong said.

“It’s the reflection of the amount of accidents that occur at intersections in more heavily urbanised areas that is of concern.”

Mr Armstrong said segregating cyclists from motorists was the safest method, for example, by using raised paths, trees or concrete barriers, although he said bike lanes and wider lanes on roads were also useful.

“It’s a stronger safety measure that gives a much higher standard of safety and perception of safety, which is important,” he said.

Educating the public around stopping distances – both motorists and cyclists – could also help improve safety, as could new legislation governing overtaking distances and how cyclists should approach pedestrian crossings. At the moment, cyclists must stop at a crossing and put their foot down. Mr Armstrong said the rules confused motorists and many cyclists disobeyed them. It would be more sensible for cyclists to reduce their speed to walking or jogging speed at pedestrian crossings instead, he said.

Cycling is a popular method of commuting, exercising and passing the time in Canberra with a 2015 National Participation Survey showing that nearly 82,000 ACT residents get on their bikes at least once a week.