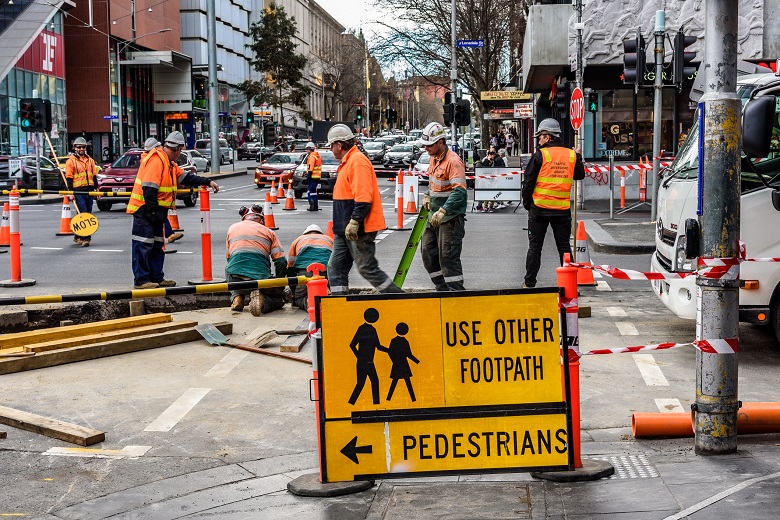 The survey of the nation’s 242 councils, published by the Australian Local Government Association (ALGA) on Friday morning, lifts the lid on challenges facing the sector.

The report, conducted by the Local Government Workforce Development Group (LGWDG), analyses data from the ABS Census and a Local Government Skills Shortage Survey completed by almost half of Australia’s councils.

The data set is one of the first comprehensive profiles of the Australian local government workforce to date.

The report reveals a workforce of 189,500 employees who are considerably older than the general Australian workforce and a  sector confronted with declining levels of participation of workers under 30, a substantial a shortage of apprentices and a major skills shortage.

ALGA President David O’Loughlin on Friday urged all levels of  government to work together to strengthen the local government workforce and laid out plans to lobby the Federal Government ahead of the anticipated May election.

“It’s a challenging picture and one which every council should be thinking about.  We can only meet the needs of our communities if we have the staff to do the job.  It requires all levels of government to be working to address these issues and I note for instance that one of the priorities for LGNSW in the impending state election is a commitment from the new government to address skills shortages,” he said.

“However, governments can only help when needs have been identified. Are you confident your council has identified its workforce development needs now and for coming years? And  what can you first do locally, before asking other governments to help?”

Councils are facing a massive skills gap and falling behind on soft skills, according to the report, which revealed almost 70 per cent of local governments are facing a skills shortage and skills gap.

As Government News exclusively reported last year, the survey found that councils are facing a shortage of key occupations, with engineers and town planners, building surveyors, and environmental health officers leading the list of in-demand occupations. 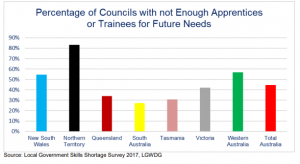 Councils were also found to be experiencing a massive skills gap, with 59 per cent saying that there was a gap between what employees were able to do and what they needed to do to perform their jobs.

A lack of training was found to be a key driver of the skills shortage, with 60 per cent of councils having unmet training needs due to high costs and a lack of local training options. 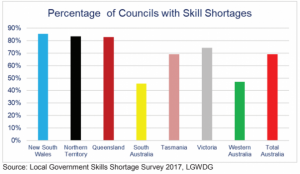 All council staff revealed the need to improve soft skills, in particular digital skills. Seventy per cent said they were poorly equipped for future digital demands with 70 per cent having done no  forecasting of changing skill requirements arising from digital disruption.

There are major challenges in closing this skills gap, according to the report, due to a lack of qualified individuals locally and the inability of councils to compete with the private sector on remuneration.

There are also significant barriers to sourcing training including a lack of qualified trainers and the high costs involved with sending staff away to attend training, the report says.

The report warns of a “major decline” in the numbers of Indigenous Australians working for local government in the Northern Territory and Queensland, and a drop reported in all states except Tasmania and Victoria.

Indigenous people make up 1.7 per cent of the local government workforce, down from 6.6 per cent in 2006, according to the Local Government Workforce and Future Skills Report.

The report has called on the national local government peak to lobby the Commonwealth to address these key challenges.

The recommendations would also see council associations engaging with training organisations to upskill staff through the design of qualifications and skills.

The peak would also commission research on the impacts of technology on the workforce under the recommendations.

Government News understands that the ALGA board met to discuss the report on Friday morning and will respond to the recommendations at a later date.