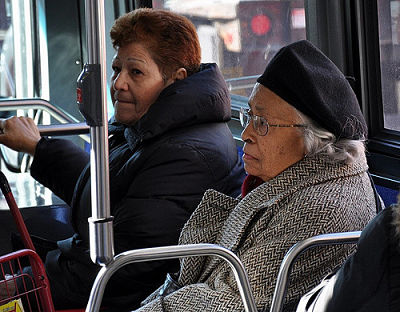 Seniors’ organisations have criticised the Independent Pricing and Regulatory Tribunal’s (IPART) recommendations that self-funded retirees should surrender their Gold Opal cards and cop a higher daily travel cap, saying it would increase social isolation among older people and damage the third economy.

IPART recommended a shake up of the pricing structure of the popular travel card in its December 2015 draft report: “More efficient, more integrated Opal fares” saying it wanted to “achieve fairer fares.” One of the major changes it proposed included tightening access to the Gold Opal card by means testing it.

The Tribunal recommended that self-funded retirees be stripped of their Gold Opals and forced onto Concession Opal Cards – where fares are set at half the adult fare and the daily cap is more than triple that of its golden stablemate, at $9.

The Council on the Ageing (COTA) NSW and the Older Women’s Network (OWN) said removing Gold Opal cards from some pensioners would damage the third economy – the volunteering sector and the unpaid caring older people do, such as caring for grandchildren or helping sick friends.

The joint submission said: “If we as a community want to encourage older retirees to contribute their time to unpaid volunteering and caring activities that benefit everyone in the community, as well as ensure that older people remain socially connected, we must provide incentives for them to get out and about. This we believe was the original intent of the low cost daily fare.

“We understand that consideration of ‘social outcomes’ is out of the scope of IPART’s report but believe that evidence has not been provided that use of public transport by people 60 years of age and older will not be negatively affected by these proposed changes.

“In addition we believe there could be more far-reaching negative social outcomes as a result of these changes. “

The Combined Pensioners and Superannuants Association of NSW (CPSA) backed this assertion: “The ability for people to remain active, particularly if they don’t have access to a car, enables them to contribute to their communities.

“Many Gold Opal card holders rely on their discounted fare to support their engagement in volunteer and community work, as well as to undertake caring responsibilities. Increasing the cost of public transport, either through tightening eligibility for the Gold Opal or by raising fares, will increase the costs of volunteering and the costs of fulfilling unpaid caring responsibilities.”

A 2015 report by National Seniors Australia and Associate Professor Elizabeth Brooke of Swinburne University of Technology estimated the value of unpaid caring and volunteering hours by older Australians at $38.3 billion a year.

The CPSA also argued in its IPART submission that removing this universal travel entitlement could socially isolate some older people and cause harm to their mental and physical health, making them more likely to wind up in residential aged care.

“Without a reliable, accessible and affordable transport system, such people are left isolated and unable to independently go about their daily lives [with] poorer health and wellbeing outcomes,” said the CPSA in its submission to IPART.

Any permanent NSW resident aged over 60 and working 20 hours or less a week is entitled to a NSW Seniors Card and they are automatically entitled to a Gold Opal card – one of the view universal age-related entitlements in the state. About 1.4 million people currently have NSW Seniors Cards.

IPART also recommended that only those people who also hold Pensioner Concession Cards and NSW War Widows cards should have Gold Opal cards and it has suggested lifting the daily travel cap from $2.50 to $3.60 in year one and up to $4 by 2018-9.

All three organisations argued that any increase to the $2.50 fare had the potential to reduce the number of older people using public transport, regardless of their income.

The CPSA said it had received “numerous phone calls” from low income Seniors Card holders aged between 60 and 65, who were unemployed but below pension age, who used public transport regularly, “These people have indicated they will need to reduce their use of public transport should the changes go ahead.”

The Association has also said Gold Opal cards should be extended to people on Newstart and Youth Allowance, who are on between $217 and $262 a week.

COTA and OWN said that most older people were on fixed incomes but faced increased living expenses, such as council rates, strata fees and rents and community aged care costs.

“Unlike those people working full time, older people’s incomes tend to decrease over time, as they give up work completely, draw down their superannuation and then become increasingly reliant on the age pension,” said their IPART submission.

“There is no way the majority of older people can make up the difference in the proposed concession fare increases.”

They argued that the proposed changes will hit single women aged between 60 and 65 hardest, since they do not yet qualify for a pension and they are often the most disadvantaged.

But IPART has argued that concession travel for pensioners has not increased from $2.50 for ten years, while fares for public transport had gone up by around 30 per cent.

Another controversial recommendation stemming from the IPART report is a proposal to axe the “eight trips and you travel for free” perk.

The suggestion is that it is replaced with an eye-wateringly complicated weekly travel credit scheme where commuters fork out for the 10 longest (or most expensive) journeys bookended by a bigger weekly maxim charge of $65 that rises to $70 in 2017 and then $75 in 2018.

You can read a January 2016 opinion piece about the Opal changes here.