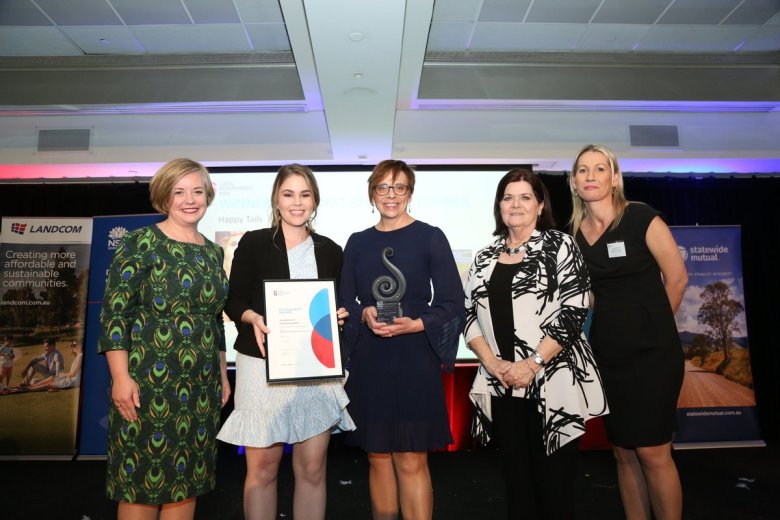 Bathurst Council has taken out an award for its Happy Tails animal rehoming social media initiative.

The state’s regional councils have ended Local Government Week on a high note, with rural councils taking out all but one of the respected RH Dougherty Awards.

The multiple gongs are welcome news for regional councils, who for months have been crippled by a state-wide drought.

The awards on Thursday, hosted by the state’s council peak LGNSW, recognised a total of 28 councils across eight award categories including excellence in communication, reporting, innovation in events and arts and culture awards.

In the RH Dougherty Category, Upper Hunter Shire Council, Bathurst, Port Macquarie-Hastings, Mid-Western Regional, Bega Valley, Tweed Shire, Bland Shire, Queanbeyan and Rous County were all applauded for their innovation, while Randwick was the only metro council in the category.

Among the highlights include Bathurst Council’s social media campaign to help re-home lost animals, Bland Shire Council’s football event which attracted thousands to a town of 500 people, a library in the Snowy Valley which partnered with the Indigenous community for NAIDOC and an emergency dashboard from Tweed Council which helped the community in the midst of a disaster.

Leading the pack in the Culture Change Innovation and Excellence Award was North Sydney Council, whose redevelopment of the Coal Loader Centre was applauded alongside Coffs Harbour’s PlaceScore – an online tool to engage with the community.

“As the closest tier of government to the local community, it is critical that councils engage in best practice communication with the people they serve,” Clr Scott said.

“Great two-way communication strengthens local democracy and helps ensure we all have a say in our future.”