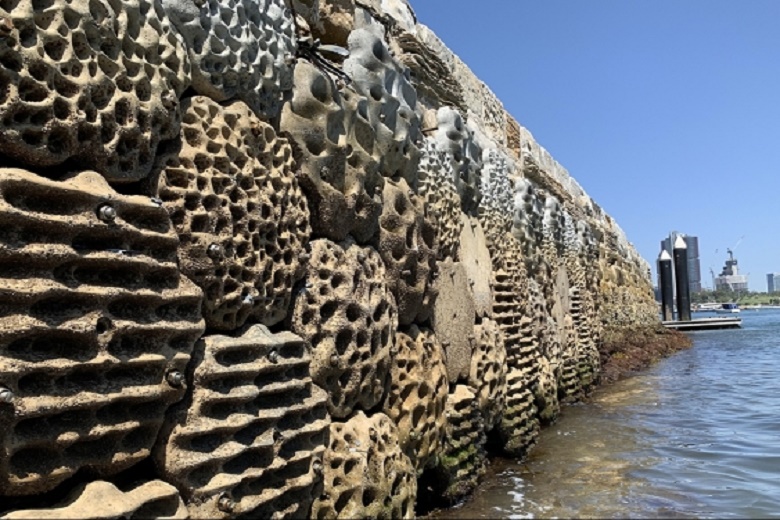 Seawalls fitted with textures to provide refuge for sea creatures are among the new techniques being explored to protect coast areas. (UNSW)

Instead of building coastal defences authorities should concentrate on restoring natural ecosystems, according to a new framework for building and managing coastal infrastructure.

Ocean gardening to protect key species and retrofitting sea walls with textures that provide refuge for intertidal organisms are just two ways to help coastal systems resist or recover from the impacts of climate change and construction, according to the framework.

Over the past three decades, sea surface temperatures and sea levels have risen and intense storms have become more frequent, leaving coastal ecosystems under increasing stress.

To date, the response has been to design coastal defences. But Dr Mariana Mayer Pinto from the School of Biological, Earth and Environmental Sciences at the University of NSW says the decisions that work for coastal defence don’t always work for nature, and may actually be doing more harm than good.

“The significant ecological impacts of these structures are likely to exacerbate current trends in biodiversity loss,” she told Government News.

Best practice, says Dr Mayer Pinto, is to avoid building on coastlines, and focus on the conservation or restoration of natural ecosystems that buffer the impact of storms, such as coral reefs, oyster reefs and salt marshes.

But with more than 40 per cent of the global population living within 100km of the coast, she accepts that development can’t always be avoided.

Her world-first framework, written alongside other UNSW scientists and published in the journal Bioscience, proposes creative, evidence-based ways to design and build infrastructure that will help coastal systems resist and recover from the effects of climate change.

“There is a great opportunity to improve how we build on the coast,” said Dr Mayer Pinto, who puts forward two main recommendations, depending on whether the system is in a tropical or temperate environment.

In tropical environments, where warmer waters are putting thermal stress on marine habitats, she suggests building or retrofitting sea walls with water-retaining features. Holes, textures, crevices, ledges and shaded and well-flushed rock pools can all act as climate refuges for intertidal organisms.

“Currently, most artificial structures in coastal environments are built for a single purpose, such as coastal protection, tourism, energy or food production. Most of our modifications can help make structures multi-purpose,” she said.

In more temperate areas, it’s about protecting key species who are being invaded by tropical species seeking cooler waters. Ocean gardening, she says, is the answer.

“If there’s an invasive species we don’t want in an environment, we try to ‘harvest’ or remove it, and if it’s a species we’d like to see more of because it plays an important ecological role in the ecosystem, we seed or transplant it.”

Dr Mayer Pinto and her team have conducted small-scale experiments on their recommendations in around 20 harbours in varying climatic zones worldwide. The Living Seawalls project in Sydney Harbour is one she is most proud of.

“We are retrofitting walls around the harbour with tiles that mimic the natural features of the rocky shores and serve as micro habitats for marine organisms.”

Dr Mayer Pinto hopes strategies that protect marine environments from both human development and thermal threats will be implemented as government policy on a large-scale around the world before habitats can no longer be saved.

“When people are building new developments – if these developments are inevitable – we want to see these micro-habitats incorporated into the hard structures of sea walls or buildings.

“Coastal systems are seeing a massive squeeze from climate change threats and construction. Doing nothing to protect them will be catastrophic.”