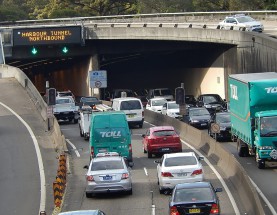 Transport Ministers across Australia all love a cool new public transit app to make life easier for commuters, but in New South Wales former truckie and now Roads and Maritime Minister Duncan Gay is ensuring the rubber on the state’s roads gets coded-up fast.

Mr Gay this week launched a small fleet of apps directed at private and commercial drivers to help them save time and fuel (and dare we say carbon emissions) negotiating Sydney’s infamously congested roads which are set to become even messier as major projects dig themselves into the CBD and surrounding motorways like the M5.

While state governments plugging apps is hardly a new play, what’s different about NSW and Mr Gay’s big push is that he wants private car and commercial drivers plugged into the new apps fast – so that those about to embark on a journey have a real time and intelligent journey view before they leave.

It’s not just about traffic conditions on routes and roads either.  Information on other transport options and the comparative time they will take for when things get really rough are also being pushed, all backed with alerts.

“No longer do you have to wonder what the traffic will be like on any particular morning – these apps make your phone like a pocket sized crystal ball,” Mr Gay said.

“These new apps are great – they allow you to type into your phone where and when you’re going and the app will tell you what the fastest route is at that exact time,” Mr Gay said.

(For a run through of the apps go to the end of this story or hit this link to Roads NSW for details and downloads).

The move by the NSW roads minister is also a loud and clear signal from the NSW government that it wants car drivers and other road users – as much as public transport users – included front and centre in the creation of new state-backed apps.

Never short of a colourful quote, Mr Gay has previously described inner city dwellers as “anti-road zealots” who sit in cafes sipping lattes “and complain about cars and roads.”

While few dispute the utility of public transport apps, like the runaway success of TripView, the deliberate push to create road centric mobile software could go some way to appeasing large tracts of suburban car commuters – for whom roads are an electoral hot button – that they are not being left behind in the big open data push.

When Government News downloaded and started digging around the fine print of “Snarl”  – which provides free “up-to-date information about road incidents and congestion across the road network and close to the customer’s travel route or location” we discovered road data is very much a two-way street.

“Snarl will submit data back to Transport for NSW when you have planned and are following a route in NSW. This helps the traffic network data and is submitted anonymously,” Snarl’s fine print says.

Put more simply, the government is now letting loose privately developed apps on commuters that report a user’s movement’s and progress back to traffic management authorities as they travel.

Aside from gleaning valuable traffic data, a big upside from the apps is that they create a kind of proxy telematics system that spares the government and carmakers the expense of installing sensors along roads to submit largely similar information.

The NSW government has a strong and vested interest in getting car users kitted up to push and pull data too, not least because it will need all the real time information it can get its hands on to keep things running even moderately smoothly

Ads featuring Premier Mike Baird pleading for patience during years of coming construction  for the George Street light rail installation as well as the controversial WestConnex freeway project will place strain on Sydney’s roads like never before until the projects are finally delivered.

“App developers were given access to Roads and Maritime and Transport for NSW data which they have each used differently to present travel time estimates to all types of commuters and road users,”  Mr Gay said.

Auto is for customers who have a number of locations they often travel to and want to see the current estimated travel time to help them plan when to leave.

Commute is for commuters to compare multiple transport options and can predict where the customer wants to travel based on previous entries as well as the user’s calendar events.

Commuter NSW compares public transport and driving times in a single view and how these travel times change based on different departure times.  Customers can also record daily travels which can then be re-used to predict the duration of the trip in current traffic situations.

EasyDrop is for commercial delivery drivers who want an interactive tool to manage their daily delivery schedule, plan for the fastest routes and be up-to-date with traffic conditions.

Plan A helps customers with a busy schedule who want up-to-date information on congestion, suggested travel times and alerts for when to leave.

Snarl gives up-to-date information about road incidents and congestion across the road network and close to the customer’s travel route or location.