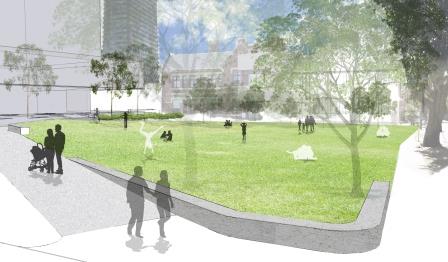 Our wrap of the latest infrastructure projects and initiatives being delivered by governments around Australia.

Melbourne City Councillors have endorsed a plan for a $3.5 million 5,000-square metre urban park for Southbank, the municipality’s most densely populated suburb.

Acting Lord Mayor Arron Wood said the park would be a terrific addition to Southbank, which has the least amount of public open space per person in the City of Melbourne.

As the city grows rapidly, more than 80 per cent of residents live in apartments so open space will continue to be absolutely critical to maintain liveability, he said.

Southbank’s 22,000 residents and 50,000 daily workforce are expected to double in the next decade, placing even more pressure on the area’s limited open spaces.

The new park will include an interactive playground, a communal garden and leafy grassed places alongside improved pedestrian and cycle connections.

“For active sports such as basketball, we’re exploring options to further expand the size of the park by utilising the nearby Kings Way under-croft.”

The City of Melbourne is preparing documents for the public tender of the private development site. The successful bidder will be required to deliver additional community facilities for the Boyd Hub, as well as affordable housing and a high green star rating in their development.

Construction on the new park is scheduled to commence in August.

The funding from the NSW Government’s Parramatta Road Urban Amenity Improvement Program includes $1.3 million for master planning and design and a provisional $21 million for construction and delivery.

Seven projects have been identified within Inner West Council which include greenway connections under Parramatta Road and Longport Street, public domain improvements to key north-south streets next to Parramatta Road, a new cycle connection along Dot Lane and conversion of Petersham Street to a so-called pocket park.

The council said it was committed to completing the designs by December 2019 with projects due to be completed by 2021, except for the Pyrmont Bridge Road improvements which are to finish in 2023 on account of WestConnex.

The key components of the $8 million upgrades which form part of the broader renewal of the Kings Square precinct include more shaded areas, over 2,300 square metres of public gardens and grassed areas, a new outdoor interactive children’s play space and a designated church yard and urban garden area.

The upgrades will also see new paving and street furniture extending further out to the edges of the square, a greater priority on pedestrians but with the retention of service vehicle access, universally accessible parking and vehicle drop-off zones, and flexible outdoor spaces for events.

It coincides with the council’s Kings Square Renewal project, which recently entered a new phase with demolition activity in the city centre gathering momentum in recent weeks.

Fremantle Mayor Brad Pettitt said the projects would reenergise the heart of the city, making it a safer and more welcoming place.

The endorsement of the plan followed a public consultation phase in which more than 350 individuals, organisations and community groups provided feedback. This included around 160 school-aged children who took part in one of five design workshops for the new play space.

“The City will now move into the detailed design phase which will include budgeting and staging options as well as further traffic modelling, accessibility and safety audits, consultation with the Whadjuk working party and selection of colour palettes and materials,” the council said.

The Western Australian Government has reopened the historic Kent Street Weir following a $4.8 million refurbishment to the 90-year-old structure. The works have extended the life of the weir by about 50 years.

Water Minister Dave Kelly said the weir has been a focal point for community recreation in the Canning River Regional Park for decades, attracting many different recreational uses including running, cycling and canoeing.

Refurbishment works included construction of new piers to support the structure, a walkway with disabled access, mechanised weir gates that can be operated remotely in response to river levels, and a new fishway enabling fish to move up and downstream when the weir is closed.

Construction began in May 2017 and has been managed by the Department of Water and Environmental Regulation in collaboration with the City of Canning and the Department of Biodiversity, Conservation and Attractions.