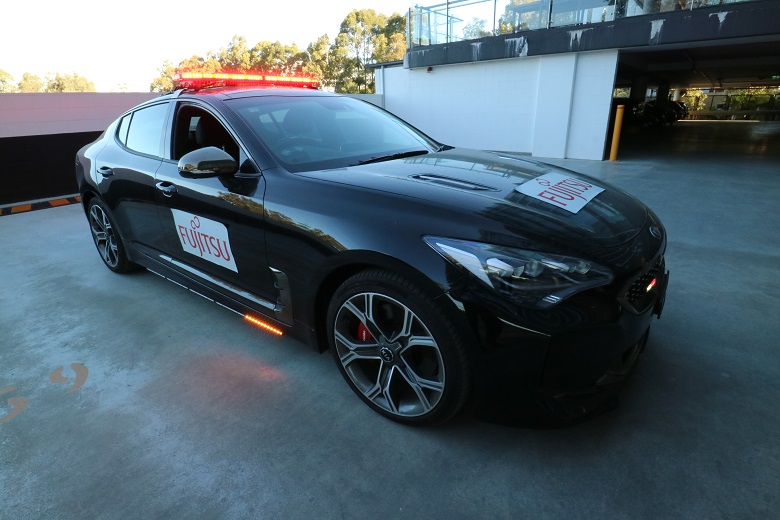 This prototype smart cop car can alert officers driving it if someone draws a weapon and automatically send for back-up.

KIA Australia and Fujitsu have collaborated on a prototype of an artificial intelligence-enabled digital police car.

The high-tech police car does away with multiple screens, software, hardware and metres of cabling from highway patrol vehicles.

Instead, all the information that a police officer normally has access to via multiple devices is shown on a dashboard infotainment system, which bundles together technologies such as radar, number plate recognition technology, in car video equipment and the mobile data terminal (MDT).

The “artificial intelligence-enabled digital police car”, in this instance a Kia Stinger, can alert the driver if someone draws a weapon and send for back-up, Mr Viswanathan said.

The car also embeds biometrics in the gearstick, which removes the requirement for officers to log in to multiple systems.

“Fujitsu’s biometric authentication technology PalmSecure secures sensitive information, while three single-feature action buttons on the front of the gearstick control emergency lights and sirens, enhancing the safety of officers who are no longer required to take their eyes off the road to operate a complex control pad.”

“It also removes the time-consuming process of requiring multiple tenders from numerous individual suppliers for each piece of equipment.”

Having multiple technologies integrated into the infotainment system eliminates issues associated with airbag deployment, he added.

The Stinger, which is capable of accelerating to 100km/h in less than five seconds, has a five-star ANCAP safety rating.

“The Stinger’s core performance and safety characteristics have played a key part in the decision by state police forces to integrate the vehicle into their road policing divisions,” Mr Forbes said.

“We identified the amount of systems redundancy within the current vehicle fit-out and are excited to work with Fujitsu to push for a higher degree of integration of law enforcement systems within the Stinger.”

Inspiration for other service vehicles

Fujitsu Australia and New Zealand CEO, Mike Foster, said the high-tech vehicle could be applied to other emergency service vehicles.

“We believe this approach has a much wider application than just use within the police force,” Mr Foster said.

“Fujitsu is working to develop an enhanced vehicle ecosystem by extending the technology to meet multiple vehicle needs including ambulance, fire and rescue services, security vehicles and taxis.”